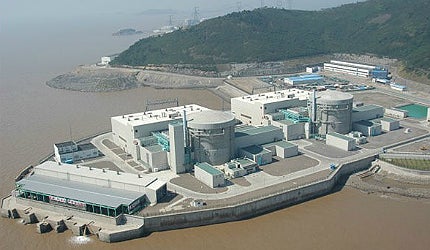 With the commercial operation of phases one and two of the Qinshan NPP, China became the seventh country to be capable of constructing nuclear power stations on its own.

Construction by the Qinshan Nuclear Power Company and expansions

“With the commercial operation of phases one and two of the Qinshan NPP, China became the seventh country to be capable of constructing nuclear power stations on its own.”

Construction of Qinshan NPP commenced in 1985 under the ownership of the Qinshan Nuclear Power Company. The power plant was designed and constructed by China, with 95% of the plant’s components being developed within the country.

Expansion of phase one is currently underway, with plans to include two units of 1,000MW each. The units are expected to be operational by 2013 and 2014. An investment of $3.82bn is being made in the expansion.

Phase two has been developed in two stages. Construction on stage one began in June 1996. The two units of stage one began operating in 2002 and 2004 respectively. The units were designed and constructed indigenously. The investment cost for each unit of the second phase was $1,330/KWe.

Construction work on phase three began in June 1998. The two units became operational in 2002 and 2003 respectively. The two units, developed at a cost of $2.88bn, have a lifespan of 40 years. The two units are owned by the Third Qinshan Nuclear Power Company (TQNPC).

The power plant now has seven reactors with a combined capacity of 2,600MW.

Phase one has a single 320MW pressurised water reactor which has been built with a lifespan of 30 years.

Stage one of phase two has two 650MW pressurised water reactors. The CNP-650 reactors were designed by China indigenously. Units three and four also comprise of the CNP-600 reactors.

Phase three of the Qinshan NPP has two 728MWe CANDU-6 pressurised heavy water reactors designed by Atomic Energy of Canada (AECL) and built in partnership with TQNPC. This was the largest project cooperation between China and Canada.

Contractors and CNI companies involved with the nuclear plant

The contract to carry out the civil works for units one and two of phase two were awarded to the China Nuclear Industry 22nd Construction (CNI22) company and CNI24 respectively. The contract for installation of the two units was awarded to CNI23 and China Nuclear Industry Fifth Construction Company. Steam generators for phase two were provided by Babcock and Wilcox Co.

In February 2009, Doosan transported one of the 650MW pressurised reactors from Incheon, South Korea, for the phase two extension project.

Agreement to use uranium from spent fuel

Governments of China and Canada signed an agreement in November 2008 to develop a technology to collect the uranium from the spent fuel of the light water reactors and use it in the CANDU reactors of phase three.

“Construction of Qinshan NPP commenced in 1985 under the ownership of the Qinshan Nuclear Power Company.”

CANDU reactors are claimed to be the only commercial reactors in the world to use natural uranium.

This development will help China get 17,000MW of fuel recovered from 58,000MW of light water reactors being planned for the country by 2020.

In July 2009, AECL signed a cooperative agreement with TQNPC, China North Nuclear Fuel Corporation (CNNFC) and the Nuclear Power Institute of China (NPIC) to weigh the use of thorium fuel in CANDU reactors.

The first recovered uranium fuel bundle was placed in CANDU unit 1 in March 2010. A total of 24 such natural uranium equivalent (NUE) bundles were placed in the phase three reactors during the next year.