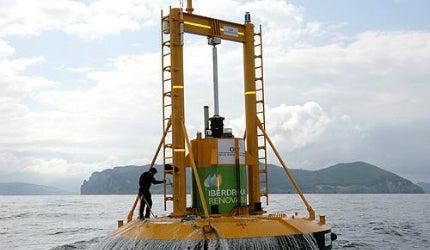 Reedsport Wave Power Station is located on the west coast of the US, 2.5 miles off the coast of Reedsport, Oregon in Douglas County. It is currently under construction and will be the first commercial utility scale wave farm in the US.

Estimated at $64m, the project is being developed by the New Jersey based Ocean Power Technologies. The wave farm will have an installed capacity of 1.5MW in the first stage with provision for future expansions. Preliminary power permits allow the project to increase production to 50MW.

Power generated at the Reedsport Wind Station will be supplied to the state owned Pacific Northwest Generating Cooperative (PNGC). The clean energy produced from the waves will be sufficient to power 1,100. It will also displace 2,110t of carbon dioxide annually.

The project received licence from the Federal Energy Regulatory Commission (FERC) in August 2012. OPT originally planned to deploy the wave farm towards the end of 2012. Due to bad weather conditions, completion of the project is now scheduled for early 2013. The project is currently in the final testing stages.

The project will feature 10 PB50 PowerBuoy systems that will generate 4,140MWh a year based on wave resource. The PB50 systems will be installed in two phases. Construction of the first PowerBuoy commenced in February 2010 and is expected to be installed at the site by 2011. It is being built by Oregon Iron Works.

"The project will feature 10 PB50 PowerBuoy systems that will generate 4,140MWh a year."

After completion, the PowerBuoy will weigh 200t and will measure 150ft tall and 40ft wide. Estimated to cost $4m, it has a generating capacity of 150kW.

In June 2012, OPT completed the acceptance tests of the power takeoff (PTO) units of the PB50. The PTO units are currently being integrated with the PB50.

Phase 2 involves construction and installation of the remaining nine buoys. These are expected to be installed at a cost of $60m.

Power generated by the buoys will be transmitted to the shore through an underwater power cable. A conduit and a cable terminator are connected to the grid connection box near shoreline.

The project has received financial assistance from the US Department of Energy (DoE) in two tranches. The first tranche was in 2008, for a sum of $2m towards construction of PowerBuoy and the second tranche of $2.4m towards design and development of the wave farm in September 2010. PNGC has contributed $500,000 towards Phase 1 through a power purchase agreement.

PowerBuoy is an offshore wave energy converter. It is anchored in the bottom of the sea with most of the machine submerged in water.

It bobs with the rise and fall of waves, resulting in the movement of a piston inside the buoy. This movement drives the generator to produce electricity which is sent onshore via an underwater cable.

The PowerBuoy uses computer technology for the control and power conversion of wave energy.

These include modular construction processes, patented electronic systems, wave energy conversion and transfer systems. It also includes a generating system that can effectively produce power at low and variable speeds.

The buoy is designed to prevent any loss of electricity or electromagnetic emissions. It can be immersed in water up to 100ft-150ft (30m-50m). All the electrical and transmission devices are insulated and housed in proper enclosures. The underwater cable is also insulated to protect itself from stray currents.

Under construction off the shore of Oregon, US, the project will be the first commercial utility scale wave farm in the country.

The Blyth offshore wind turbine blade test facility is located in Northumberland, in the UK.

Ocean Power has completed testing of the power take-off (PTO) units for its utility-scale PowerBuoy PB150, which is expected to be deployed off the coast of Reedsport in Oregon, US.