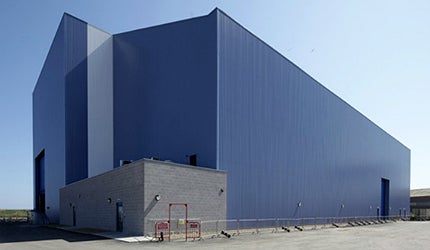 The 5,700 square metre (61,354 square feet) facility will be the largest test facility in the world. Narec will start commercial operation of the facility at the beginning of 2013. It is planning to achieve ISO17025 accreditation for the facility.

The project is part of a $129m (£80m) investment by Narec on testing facilities for offshore renewable energy technologies.

Offshore turbine blade manufacturers can test their blade prototypes at the facility and meliorate the design, before they are taken to the offshore location.

It will create better opportunities for blade developers to grow, improve efficiency and become reliable in the market, before the wind turbines turn to offshore operations.

"A total of six static winches are fixed to 132 steel rings on the floor that will be used to bend the blades during testing."

The main building is 123m long and the test hub is 15m high, with two huge rings. The top ring is of eight metres in diameter. The bottom ring is smaller and will be used to test blades with smaller root diameters.

In order to position the rings accurately in the concrete structure, 216 post-tensioned bars have been placed.

A total of six static winches are fixed to 132 steel rings on the floor that will be used to bend the blades during testing.

The facility will be able to position 15 individual turbines in three arrays. During testing the turbines will be connected to the grid. Both dynamic and static tests can be performed rigorously.

Construction of the blade test facility was started in December 2009 and completed in August 2012.

The construction was highly focused towards the testing technology and the challenges of testing longer and a higher number of blades.

Shepherd Construction constructed the steel structure of the new testing facility. It delivered the project in August 2012, after close collaboration with Narec’s project team. Converteam and MTS System formed a consortium to design, develop and commission the test rig for the test facility. The consortium will be responsible for the delivery of mechanical elements of the test bench.

"One North East, a regional development agency, has supported the project with $5m (£3.5m) of funding."

Converteam was also selected as the technical leader for the wind turbine testing centre. Under the contract, it will supply a 15MW, 10rpm direct drive motor with a MV7000 variable speed drive unit.

Red Box Design was the architect of the facility. The design team employed Turner & Townsend for project management and cost management services.

Finley Structures was subcontracted by Shepherd Construction to fabricate and erect the steel frame of the test facility. Arup was the structural engineer. SES was the mechanical and electrical works contractor.

Moog Industrial Group was awarded a contract to supply a test system, test controller and a power unit comprised of six Moog RKP Radial Piston Pumps. The system will be used to evaluate and test the wind turbine blades under dynamic loading conditions.

One North East, a regional development agency, has supported the project with $5m (£3.5m) of funding. The European Regional Development Fund (ERDF) has invested $7m (£4.7m).

The Lincs offshore wind farm is one of the five renewable projects under development by Centrica Renewable Energy (Centrica) in the Greater Wash.

A UK industry-led task force has made recommendations on how the cost of offshore wind can be reduced. We ask industry experts what they think of these proposals and whether they go far enough in slashing the price of power production.