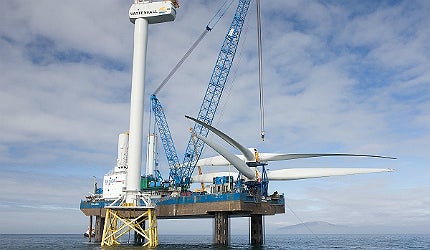 Offshore wind is energy saving, emissions saving and, potentially, life saving. The only thing it doesn’t save on is production costs, but not for much longer.

The UK’s Offshore Wind Cost Reduction Task Force (CRTF) has confirmed that the cost of this energy resource can be slashed by more than 30% to £100 per megawatt-hour by 2020, a target set by the government in the 2011 Renewables Roadmap.

Power-technology’s Sarah Blackman asked experts in the sector, including an academic, consultant, renewable programme director, financial chief and government advisor, whether they thought this goal was achievable.

Their answer was a resounding yes, on the condition that the industry follows the cost-cutting measures set by the CRTF in its first report published in June, as well as a few saving strategies of their own.

Sarah Blackman: One of the measures that the CRT believes will help cut wind power costs is to improve access to project financing in order to achieve a stronger project pipeline, with minimised fallow periods.

Does wind power represent an attractive investment at the moment, and how can the industry and the government help to encourage investors in the future?

“Research undertaken in spring 2012 indicates that lenders are looking increasingly favourably on lending to offshore wind.

Medium-term concerns over how the Energy Market Reform will operate are impacting long-term development decisions as investors have little gauge for what return profiles and cash flows may look like.

On near-term projects, which will be built out in 2012 or early 2013, it is EU and banking turmoil which is creating challenging times for lending to renewables, not UK policy uncertainty.

A speedy clarification of renewables obligation banding beyond 2013 and certainty on how energy market reform will operate from 2014 and beyond would help deliver greater medium-to-long term direction.”

I think we can do a lot more as an industry to properly understand and explain the real risks associated with wind farm development.

The message we seem to be giving at the moment is that all offshore projects are high risk – but is this really true? How does offshore wind compare to any other large infrastructure projects in terms of cost overruns, delays and cancelled projects?

I suspect that as the industry develops, and we get more projects under our belt, the risk perception will reduce but let’s try to educate the investment community in the meantime.”

SB: How much industry money is currently spent on moving through the planning and approval stages for wind projects? Are there ways to streamline the planning process avoid downtime costs?

“The planning system was recently changed with the aim of improving the predictability and duration of the process. As yet the new arrangements have not had time to work.

The requirements for evidence are evolving and consent will be more predictable once they have stabilised.

Offshore wind farms are big projects and the pre-consent expenditure runs into many tens and even hundreds of millions.

This is always likely to be the case so anything that makes consent more predictable will help projects get off the ground.”

“Planning delays are a major hindrance to delivering the new supplies of clean energy that the UK needs, whether that is wind power or nuclear.

Speeding up the planning system for major energy projects is a key priority.”

“I think investors remain concerned that the Energy Bill could provide an advantage to nuclear generation over renewables, so the sooner the details of the bill are confirmed and become law, the sooner those uncertainties will diminish.

Whether or not the bill will do enough for those wanting to invest in offshore wind remains to be seen.”

SB: The CRT points out that an increased supply chain capacity with a greater number of new entrants would improve price competition.

What role do you think smaller, high-tech companies might play in developing innovative new technologies that could improve efficiency and drive costs down?

DW: “Smaller companies play a huge role in bringing through new machines to broaden the market, such as EWT at the 500kw size, which means overall market size increases.

Likewise, we are now seeing bespoke wind farms developed for lower wind sites which can be deployed in urban areas and vertical access turbines which will bring wind generation potentially to on-farm deployment.”

JG: “We have seen some great examples of relatively small companies applying innovative solutions to drive down costs in the wind sector, such as Falmouth-based LDD’s new drilling rig for Gwynt-y-Mor and Beran Instruments’ condition monitoring technology.

We are seeing a lot of companies moving across from the oil and gas, defence, aerospace and marine sectors bringing with them new ideas and new ways of working.”

SB: A supportive policy climate would help improve investor confidence in offshore wind, according to members of the CRT.

Will the government fulfil this need in the coming years, whether it’s opening up new onshore and offshore sites, or introducing new wind-friendly policies?

“The UK has achieved a world-leading position in the area of offshore wind farm operations and this is, in my opinion, in part due to the government’s position.

Given commitments to meeting renewable energy targets, our current world leading position, and the favourable offshore wind environment, I would imagine that it will be in the interest of the UK Government to continue to be supportive.”

MK: “The government needs to show consistent support to justify long-term investment by suppliers. Short-term negative news items can discourage investors. The government and industry need to work together to make the case for offshore wind.”

NW: “There is undoubtedly cross party support to develop a low carbon future – what will be interesting to see is if the mixed support for wind specifically remains positive if other tidal and wave technologies take off and provide more consistent power generation.”

SB: Stepping away from the cost-cutting guidelines put forward by the task force, what actions would you, personally, like to see the offshore wind sector take to drive prices down?

DJ: “A concerted effort in optimisation all of the engineering and logistics aspects of offshore wind farms will be important, as well as a continued strong project pipeline in order to achieve economies of scale.”

MK: “Larger wind turbines show a saving in levelised energy cost that will make a significant contribution to meeting the target. The rest is down to the economies that scale and standardisation, plus a little learning by doing, would bring.”

DW: “The key factors are strong and consistent signals from governments around the world demonstrating a long-term appetite for substantial offshore wind. Secondly, the supply chain needs to work together to deliver incremental savings.

Thirdly, strong and sustained demand should encourage more of the offshore oil and gas specialists to play a bigger role, bringing a game changing approach to development and operations.”

NW: “Part of the challenge of wind generation is the revenue side – generating income more consistently – not just costs. If some of the research into storage is able to provide scalable affordable near generation storage, then the input cost will matter less – as more of the generating capacity will become revenue earning.”

CT: “Bigger blades, improved components and floating platforms all have the potential to make a big difference to costs.”

JG: “When faced with falling oil prices the oil industry’s first response was to slash costs in the supply chain. This worked to a point, but to drive down costs permanently, a new approach was needed.

“The industry then stripped out layers of inefficiency in the supply chain, outsourced non-competitive elements to third parties or via joint venture partnerships and removed wasteful processes. It was difficult and painful but there is a lot the offshore wind sector can learn from this approach.”