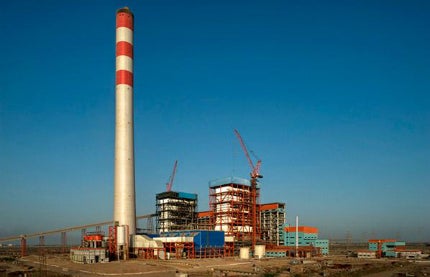 Salaya power project is located in the Jamnagar district of Gujarat, India. It is a 3,120MW coal-fuelled thermal power plant proposed to be built over three phases (phase I – 1,200 MW, phase II – 1,320MW, phase III – 600 MW). The project is being developed by Essar Power, a subsidiary of Essar Energy.

The 1,200MW phase I of the project, Salaya I, was completed in June 2012 with an investment of $1.1bn. Salaya I includes two 600MW generating units. Phase II and III of the project are currently under construction.

The Salaya power project site is spread over an area of 330ha. Coal for the plant is transported through a 17km-long conveyer from Essar’s own jetty established for importing coal.

“Salaya I will use coal imported from the Aries coal mine in Indonesia.”

Salaya I will use coal imported from the Aries coal mine in Indonesia, which was acquired by Essar in April 2010.

The proposed phase II of the project, Salaya II, will include two 660MW units. It will also use imported coal as fuel but the source of coal for Salaya II has not been decided yet.

Phase III of the project, Salaya III, will be a petroleum coke and thermal coal-based power plant. It will use circulating fluidised-bed combustion (CFBC) technology and consist of four 150MW generating units. The plant will use petroleum coke purchased from Essar’s Vadinar refinery located near the plant.

As of January 2013, the engineering and procurement works for Salaya II and III are in advanced stage and both plants are under construction. Both phases are scheduled to be commissioned in 2014.

Around 3,300MW of coal-generated power is being added at Barh near Patna in Bihar, India.

Coal is milled and fed with air into the burners. Heated coal converts the water passing through the boiler pipes into super heated steam. The generated steam spins the turbine generator to create electricity, with the low-pressure steam then sent through a condenser and converted back to liquid water for reuse in the boiler.

The plant uses seawater for cooling purposes. Flue gases generating by the plant are sent through an electrostatic precipitator (ESP) that captures fly-ash particles.

Other facilities at the plant include a coal stockyard, coal mills, a DM plant, a desalination plant, a 400kV switchyard, a main control room and an administration building.

In May 2010, Essar Power signed a power purchase agreement (PPA) with provincial state-owned utility Gujarat Urja Vikas Nigam Limited (GUVNL) to supply 1,000MW of power at a price of Rs2.40 ($.044) per unit.

“In September 2008, Essar power entered into a loan facility agreement worth $546.80m with a group of lenders led by State Bank of India.”

The engineering, procurement and construction (EPC) contractor for the Salaya power project is Essar Projects. The basic engineering works of the power plant were carried out by Essar Engineering (EESL) in consultation with Tata Consulting Engineers (TCE).

The boilers, turbines and generators for Salaya I were provided by Harbin Power, China.