Supply of Turbines and Hydro-Mechanical Equipment

Supply of Turbines and Voltage Systems 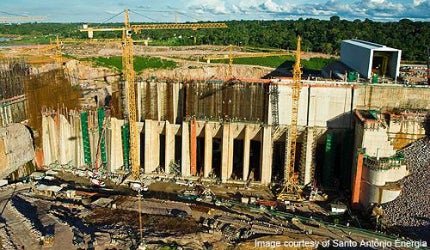 The Santo Antonio Hydroelectric Plant is being constructed on the river Madeira, at Port Velho in the state of Rondônia, Brazil.

The hydroelectric plant is one of the projects, which is being built in Amazonia to provide sustainable energy in Brazil.

When fully operational, the Santo Antonio plant will be the third largest power plant in Brazil in terms of assured electricity and the sixth largest hydroelectric plant in terms of installed capacity.

The plant has an installed capacity of 3,150.4MW, equivalent to 4% of total energy produced in the country in 2007. The plant will supply energy to 11 million homes at an average consumption rate of 148KWh a house.

"Power from the plant will be transmitted to the National Interlinked System."

The run-of-river type plant has 44 bulb turbines of 71.6MW each. This makes the project the second largest bulb-type turbine hydroelectric plant in the world.

The project involves construction of cofferdams, spillway and 271km² reservoir in eight stages.

Work on stage I started in September 2008 and was completed by November 2009. It involved construction of auxiliary cofferdams 1, 3, 4 and 5 and excavation of right and left bank of the river Madeira.

Stage II involves construction of main spillway at the bend of the river, auxiliary spillway, auxiliary cofferdam 2 on the left bank of the river and a fish transposition system. Construction work started in March 2009 and is scheduled to be completed by 2013.

Stages III and IV started in 2011. Stage III includes cofferdam 5-A on the right bank, auxiliary dam 7 on the left bank and a turbine power house. It also includes removal of auxiliary cofferdam-2 and 5.

In addition to construction of cofferdams on the river bed, Stage IV will divert the flow of the river through the main spillway. Reservoir will be flooded to conduct the first turbine test. The auxiliary cofferdam-4 on the right bank will also be removed. This stage will be completed by October 2015.

Stage V started in 2011 and included the removal of auxiliary cofferdams-1, 3, 5, 5A and 6. The first turbine began its commercial operation in this stage.

The diversion of the Madiera River began in July 2012.

Stage VI involves testing and commercial operation of the 13th turbine. The auxiliary cofferdam-7 on the left bank will be removed along with the main cofferdam on the riverbed. This stage is expected to start in 2012 and end in 2013.

Stages VII and VIII involve testing and commercial operations of the 25th and 44th turbine in 2014 and 2015 respectively.

By April 2009, Odebrecht had signed contracts with Alstom, Va Tech and Siemens for supply of turbines and power equipment.

Alstom Hydro is supplying 19 bulb turbines, 22 generators and 50% of the project’s hydro-mechanical and lifting equipment under a R$50m contract that was awarded in September 2008.

The other contract was awarded to Andritz VA Tech Hydro in December 2008. It called for the supply of 12 turbine-generators and voltage regulating systems. The contract value was R$250m.

SIN will sell 70% of the energy in the regulated market at a price of R$ 78.87 per MWh which was won in an auction.

The remaining 30% power will be sold in free market to large companies.

The bulb type turbines are usually used in run-of-river projects. These turbines move with the help of the river’s natural flow and speed avoiding the need to create artificial dams for large water falls.

The hydraulic generator in the bulb turbine turns the propellers which in turn drive the turbine generator to produce electricity.

The Belo Monte hydroelectric power plant is being built on the Xingu River in the Pará state of Brazil.

BNDES’s contribution accounts for 46.6% of the loan amount while the remaining has been contributed by financial institutions Santander, Bradesco, Unibanco, BES Investimento do Brasil, Caixa Economica Federal, Banco do Brasil, Banco do Nordeste, and Banco da Amazonia.