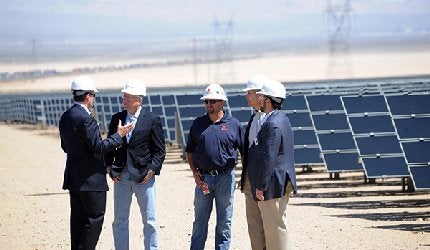 The Silver State North Solar Project is located near Primm in Nevada, 40 miles south of Las Vegas in the US. The project has an installed capacity to generate 50MW. It is the first solar power project ever sanctioned for construction on public lands in Nevada.

The Silver State power plant generates 122,000MWh of clean electricity, which is enough to power 9,000 homes in the local area annually. It reduces 42,000t of carbon dioxide (CO2) a year, which is equivalent to taking 8,000 cars off the road.

“The project will allow the state of Nevada to attain a 25% renewable portfolio standard by 2025.”

The Silver State North Solar project was built on more than 600 acres of public land overseen by the Bureau of Land Management (BLM) in Clark County.

The BLM issued a final environmental impact statement in September 2010. The US department of the interior issued a ‘Record of Decision and Right of Way Grant’ for the project in October 2010, giving the go-ahead for construction to start.

The Silver State North Solar Project will generate significant revenues in the form of state and local taxes. The project created about 300 jobs during its construction and will also provide employment for qualified local residents during monitoring and operations.

The project will help the initiative of large-scale generation of alternative energy on public lands. It will allow the state of Nevada to attain a 25% renewable portfolio standard (RPS) by 2025.

“More than 800,000 advanced thin film PV modules have been installed at the site.”

The Phase 1 of Silver State included the construction and operation of a solar photovoltaic (PV) plant and other facilities on 618 acres of public land.

More than 800,000 advanced thin film PV modules have been installed at the site. The modules were mounted on metal racks at a height of less than seven feet.

The developer plans to expand the capacity at the site by 350MW.

The plant is installed with First Solar’s advanced thin film solar modules, which can withstand high winds and floods. The solar modules generate more electricity than the conventional modules, in real-time conditions due to superior temperature invariance.

The Crescent Dunes Solar Energy Project is a concentrating solar power (CSP) plant being developed near Tonopah in Nye County, Nevada, US.

The project site is located next to the transmission line corridor and near to a major transmission hub. NV Energy has signed a 25-year power purchase agreement (PPA) to purchase the project’s output. The Silver State North Solar power plant is connected to NV Energy’s existing electrical grid.