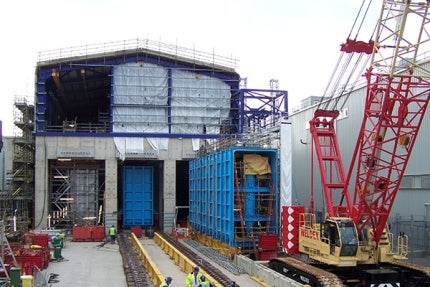 The delivery phase of the Sludge Packaging Plant (SPP1) at Sellafield was completed in June 2014. Final trials will now be carried out on the facility before it starts receiving 1,350m³ of radioactive sludge from the First Generation Magnox Storage Pond (FGMSP) in late 2014.

FGMSP is a major component in the Nuclear Decommissioning Authority’s (NDA) hazard and risk-reduction programme, which aims to decommission the four waste storage facilities at Sellafield. The other three facilities are the Pile Fuel Storage Pond, the Magnox Swarf Storage Silos and the Pile Fuel Cladding Silo.

The SPP1 consists of three stainless steel buffer storage vessels (BSVs) with a combined storage capacity of 1,500m³. The vessels will temporarily contain the sludge retrieved from the FGMSP, allow it to decant and settle, before it is treated, stored for a longer term, and then disposed off.

Site preparation work for the SPP1 project started in November 2005. A perimeter fence was erected in 2007, with the first concrete for the facility poured in 2008. Construction was completed in 2010 and tests were then carried out. The interim storage facility was constructed with an investment of £240m (approximately $404m).

The 600ha Sellafield nuclear site houses approximately 2,600 buildings, including 290 active facilities. More than 1,300 facilities need to be decommissioned at the site over a period of 100 years, and so far 100 buildings have been demolished. The cost of decommissioning the facilities is expected to be huge.

The decommissioning works at the site are being carried out by the Sellafield Site Licence Company (SLC), which is owned by Nuclear Management Partners (NMP).

The FGMSP, which was constructed during the 1950s, was used to store, cool and prepare Magnox fuel for reprocessing. The 7m-deep pond currently holds sludge, Magnox fuel and miscellaneous intermediate-level waste (ILW) and low-level waste (LLW) material.

An extended shutdown of the facility in 1974 led to the corrosion of the Magnox fuel, resulting in increased radiation levels and poor underwater viewing. The facility was later replaced by the Fuel Handling Plant in 1986. It however continued to accumulate waste over the years as no roof structure was constructed.

Each of the three BSVs is 33m long, 7m high and 3m wide, and weighs 240t. The stainless steel used for the construction is 25mm thick.

The BSVs were individually delivered to the site in 11 separate sections, and then welded together with 2,000m of weld run, radiographed and placed into the reinforced concrete building. Each vessel is fitted with 11 pulse jet mixers to ascertain that the sludge doesn’t settle and can be mobilised for final treatment.

The construction phase of SPP1 used 4,700m³ of concrete, 1,200t of reinforcing steel, 6,200m of stainless steel pipework, and 4,500 butt welds. A self-erecting tower crane was employed for the construction of the roof structure.

Conveying the radioactive sludge from FGMSP to SPP1

Sludge from the FGMSP to the SPP1 will be conveyed via a 31m-long and 50t pipebridge, which was put in place in November 2012 using a 1,200t crane. Over 1,500 fuel skips located in the pond are being retrieved using available technologies, such as a skip handler machines and a remotely operated vehicle (ROV).

A 100t crane was used to prepare the site and build the larger crane. Up to 40m³ of concrete was used to provide a stable base for the lifting operations.

Contractors involved in the SPP1 project

The SPP1 construction contract was awarded to Doosan Babcock and Balfour Beatty. NuVision Engineering was awarded a £6.5m ($11m approximately) contract to test the sludge mobilisation system installed in the SPP1.

The stainless steel joggle boxes used in the construction of the walls were supplied by Jordan Manufacturing. A multi-services processing module for the facility was supplied by Mech-Tool Engineering under a contract worth £1.5m (approximately $2.52m).