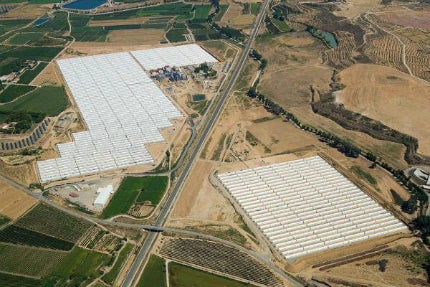 It is located in Lleida, Spain, and is the first hybridisation power plant that mixes thermo-electric power source with that of biomass.

The plant runs 24 hours a day by using solar power during the day and biomass during the night.

The $210m plant is expected to generate 22.5MW of electricity per year, which is sufficient to supply for approximately 27,000 households. It is also expected to remove approximately 24,500t of carbon dioxide from the atmosphere.

The CSP-biomass plant extends in an area of 96 acres and comprises of solar block and biomass block. The solar block utilises parabolic troughs with thermal oil to generate power, while the biomass block uses biomass, agricultural waste and supplemental natural gas as fuel.

"The plant runs 24 hours a day by using solar power during the day and biomass during the night."

The solar block of the plant is equipped with 2,688 solar field parables with a diameter of 5.5m extending 12m long. The biomass block consists of two boilers and a steam turbine generator.

The biomass boilers form part of the thermal oil loop section of the parabolic trough system. The gas firing system is also attached as a back-up. Saturated steam is generated from the solar field, while the boilers superheat the steam.

The project development also involved the construction of access road from the LV-7023 roadway to the field site, a diversion channel for the drainage waters, power line and a public road.

The hybrid power plant created approximately 350 jobs during construction, plus 30 direct and 50 indirect jobs during operation.

The turbo generator produces electricity continuously in accordance with the integrated hybridisation system, which is a 24-hour operating system. The turbine is attached with a small gas-fired generator to avoid fluctuations in the solar thermal output.

The boilers at Tremsolar Borges are compatible with both biomass and natural gas fuels. The boiler system comprises of a biomass feeding system, furnace for biomass, heat recovery system and a set of gas burners.

The parabolic troughs installed on two fields collect the solar energy in focal lines containing the absorber tubes. A thermal fluid flows around the absorber tubes and is heated to 400°C. The vapour generated by heating is transferred to the power plant block.

The biomass fuelled block will operate during the night or in the absence of direct sunlight.

"The vapour from the absorber tubes and the biomass boiler is heated in a steam generator to generate steam."

The vapour from the absorber tubes and the biomass boiler is heated in a steam generator to generate steam. The generated steam will drive the high-pressure steam turbine and the turbine will convert the steam into electrical energy.

Financing for the Termosolar Borges plant

A consortium of financial institutions provided $135.86m of funding for the Termosolar Borges power plant.

Siemens was awarded the contract for providing solar collectors for the CSP plant. The scope of the contract included design, supply and construction of the entire solar field comprising the mirrors and solar receivers.

MAN Diesel & Turbo was given the contract for providing the turbo generator for the power plant. The company also designed and supplied the steam bypass system and the condensing system.

Fianlly, COMSA EMTE Medio Ambiente will supply biomass to the Termosolar Borges power plant. It will also undertake stockpiling operations along with the fuel drying and grinding work.