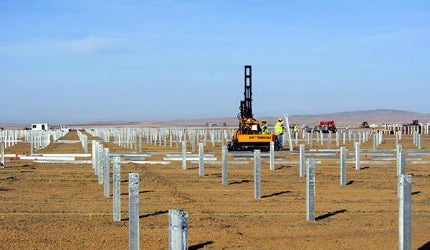 The solar power project is being developed on 3,500 acres of land in the north-western corner of the Carrisa Plains. The facility will generate sufficient electricity to serve around 160,000 homes and will reduce 377,000t of carbon dioxide emissions annually. Construction started in November 2011 and is expected to be complete by early 2015.

Pacific Gas and Electric Company (PG&E) will purchase the power generated by the plant under a 25 year power purchase agreement (PPA).

According to California’s Renewable Portfolio Standard (RPS) programme, utilities should achieve nearly 33% of their electricity consumption through renewable resources by 2020.

“The PV modules will generate electricity without releasing any emissions, waste or water, giving them a minimal carbon footprint.”

Topaz Solar Farm will be built on an unproductive agricultural land. It is situated six miles from the Carrizo Plain national monument.

The project site was chosen after an extensive research on various potential locations in California. It was selected for the availability of solar resources, close proximity of existing Moro Bay to Midway transmission lines, land uses and environmental factors.

It will use advanced thin-film cadmium telluride (CdTe) PV modules and annually produce around 1,100GWh of clean energy. The PV modules will generate electricity without releasing any emissions, waste or water, giving them a minimal carbon footprint compared with other PV technologies. The solar farm will consist of nine million PV panels.

Due to its location, the project needs minimal transmission infrastructure.

The solar farm will be developed in phases over three to four years. It will be spread in 5.5 square miles north, Highway 58 south, and east of Bitterwater road in the California Valley.

Construction of phase one started in November 2011 and phase two in early January 2012. The first two phases include construction of offices and access roads to solar fields.

Phase three of construction was initially scheduled for 23 February 2012 but began on 2 May 2012. Construction of phase four is scheduled to begin in November 2012. The first solar panel was installed on 16 May 2012.

Infrastructure supporting the PV systems is installed directly on the ground, avoiding the necessity of any concrete work. The construction waste will be recycled.

First Solar is the engineering, procurement and construction (EPC) contractor of the solar project. Under the EPC contract, the company will provide thin-film photovoltaic (PV) modules and EPC services. The company will also operate and maintain the solar farm.

On 7 December 2011, MidAmerican Energy Holdings purchased the project from First Solar and raised $850m in 27-year amortising bonds towards the project. The bonds are BBB-rated and not supported by a government guarantee.

The final environmental impact report (EIR) was prepared by San Luis Obispo County, under the California Environmental Quality Act (CEQA). The county is a public agency who is responsible for the approval of the project. The report was released on 3 January 2011.

The project will have a low environmental impact on the human and natural environment. The agencies have proposed a few measures to minimise the impact of the project.

These measures will be implemented during the construction and operations of the project to maintain and ensure consistency of federal, state and county’s rules and regulations.