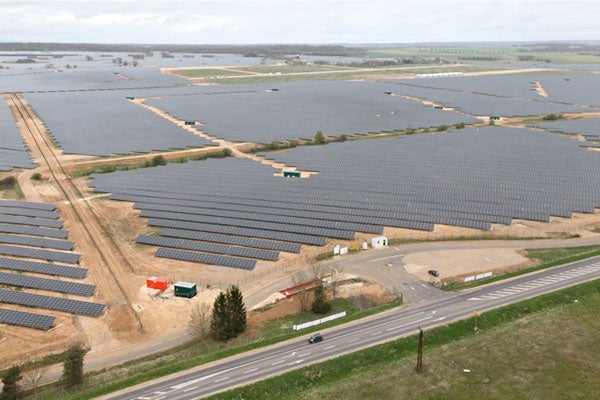 The Toul-Rosieres Solar Park in the Lorraine region is the largest photovoltaic power station in France, with an installed capacity of 115MW.

The solar park has an annual output of approximately 60GWh per year. It supplies electricity sufficient for 55,000 people and eliminates 4,600 tonnes of CO² emissions.

EDF Energies Nouvelles initiated and developed the Toul-Rosieres solar plant. The company will maintain and operate the plant through its subsidiary EDF En Services for a period of 20 years.

The Toul-Rosieres solar park consists of three units including a 55MW unit, a 36MW unit and a 24MW unit. It has been developed on a former military airbase extending over 520ha.

"It renewed the air base completely by demolishing 280 buildings, removing asbestos from around 170 buildings and clearing approximately 8,000t of polluted soil."

EDF Energies Nouvelles took the site on lease for 22 years. It renewed the air base completely by demolishing 280 buildings, removing asbestos from around 170 buildings and clearing approximately 8,000t of polluted soil. It also completed a decontamination of the site.

The construction works commenced in June 2011. The solar park was officially inaugurated in May 2012 and the commercial operations began in June 2012.

Ownership and financing of the Toul-Rosieres solar plant

Mitsubishi Corporation purchased 50% of the first unit of the plant (55MW) through its subsidiary, Diamond Generating Europe.

Marguerite Fund purchased the 36MW unit II in 2012. It financed the construction of the solar park through a term loan facility taken from BNP Paribas and Crédit Agricole Corporate and Investment Bank.

"The next-generation photovoltaic thin-film panels are much more efficient than conventional silicon-based modules."

Power generation and transmission from the Toul-Rosieres solar plant

The solar rays concentrated on the thin film photovoltaic modules are transformed into a continuous electric current. The direct current is passed to a power supply system installed at the plant site and converted into alternating current (AC). The transformer at the plant site controls the voltage levels and accumulates the electricity to a grid.

The entire power generated at the plant is purchased by EDF through a Power Purchase Agreement valid for a period of 20 years.

The power plant construction included the division of plant site into tranches and installation of oblique steel / aluminum structures to attach the solar panels. The tranches were attached to an anchoring system for maintenance and control.

The power plant created approximately 700 jobs during the construction phase. Around 12,000 modules were installed on a single day ensuring early completion of the project.

First Solar was awarded the contract for supplying the solar PV panels for the Toul-Rosieres solar park.