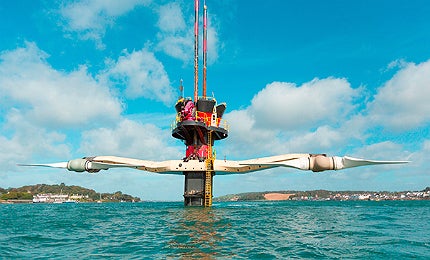 The proposed 400MW West Islay Tidal Farm will be one of the first commercial scale tidal energy projects in the world. The project is located off the west coast of Islay, the fifth largest island of Scotland.

The West Islay Tidal Farm is scheduled to be developed in a number of phases. The initial proposal is for an installed capacity of 30MW by 2019, based on the installation of 30 tidal turbines.

The environmental impact assessment (EIA) for the initial phase was completed in 2013 and an application for consent was submitted to the Scottish Government in September 2013.

The project site was initially identified by DP Marine Energy in 2007 as an ideal tidal energy site, capable of supporting large scale commercial development. The current proposal is for a 30MW tidal farm, but it will be expanded to 400MW in future.

“The initial proposal is for an installed capacity of 30MW by 2019, based on the installation of 30 tidal turbines.”

The Irish Sea offers significant tidal resources, as the seawater from the Atlantic flows into the Irish Sea from both the south via the Western Approaches and the north, via the North Channel.

The island of Islay is situated on the eastern side of the approaches to the North Channel. The flows entering the Irish Sea through this channel especially are of higher velocity, compared to those into the southern Irish Sea, because of the relatively narrow entry, seabed profile and coastline topography.

Located on the western side of the island, the West Islay Tidal project site has the measured flows approaching 8k or 3m/s speed. Combined with the flat seabed across the site with water depths of between 35m and 50m, this makes it suitable for immediate deployment of turbines.

Other advantages of the proposed site include the future development potential with expansion to deeper water, the absence of large sediment deposits and large concentrations of resident marine life.

The project site is spread across 8km² and lies approximately 8km off the western tip of the island of Islay.

The first phase of the project will be a 6MW demonstration phase. The second phase will have an installed capacity of 30MW. The full capacity of 400MW will be reached through a staged build out by 2024.

With the award of seabed lease from the Crown Estate in October 2011, the initial phases of the project are in advanced stages of development.

DPME is focusing on using technologies based on open rotor horizontal axis turbines, whether mounted entirely subsea or with an element of surface penetration.

“It is being developed by DP Marine Energy (DPME) in partnership with DEME Blue Energy (DBE).”

The initial phase of the development will be based on 30 one-megawatt rotor tidal turbines, although the detailed design of turbines to be installed is not yet finalised.

However, at least 6MW of the 30MW demonstration project, which is funded by the European Union’s 7th Framework Programme (FP7), will utilise the Siemens MCT SeaGen S configuration, with twin one-megawatt rotors mounted on a single tower foundation. This is a design configuration which has already been successfully tested and demonstrated since 2008, in the Strangford Lough narrows in Northern Ireland.

One of the major features of the SeaGen S technology is its inclusion of a surface piercing tower for access, coupled with a hydraulic crossbeam for maintenance and dry marshall /connection to export cable. Other technologies being considered for the project include the Alstom 1MW TGL device and the Hammerfest device.

The West Islay Tidal energy project has a secured grid capacity of 30MW. The application for grid connection was submitted in 2013. The transmission line of the tidal firm will consist of underground lines, as well as overhead lines carried on wooden poles.

“The West Islay Tidal energy project has a secured grid capacity of 30MW.”

The electricity will be first transmitted to Kintra on Islay, via a subsea cable and then over ground to a location near Port Ellen. The line will further pass through a subsea cable from Port Ellen to the mainland. Detailed routing of the export line is yet to be finalised.

The consultation process for the proposed project engaging key stakeholders has been underway since 2009. Detailed marine surveys, including seabed benthic studies and sea bird and marine mammal surveys, for the project have been carried out through 2010, 2011 and 2012. The surveys have indicated that the development is unlikely to have any significant environmental impact.

The environmental baseline surveys for the full-scale 400MW tidal farm have been commissioned in parallel with the 30MW assessment.

Sea Bird Marine Mammal surveys have been undertaken by the environmental consultancy SAMS Research Services (SRSL), while PBA Roger Tym has been commissioned to undertake a Socio-Economic, Tourism and Recreation Assessment relating to the proposed development.

The UK’s energy policy envisages 20% of electricity supply from renewable sources by 2020 and an 80% reduction of carbon dioxide (CO2) emissions by 2050.

The Scottish Government has gone a step ahead by setting a far more ambitious target of obtaining 50% of the country’s electricity supply from renewable sources by 2020. Marine renewable energy sources, such as wave, tidal and offshore wind, are being astutely explored to meet this target.

Scotland is believed to be endowed with 25% of Europe’s total tidal power potential. The Scottish Government, in collaboration with the crown estate, has proposed a number of tidal power facilities to be built around the Orkney islands and the Pentland Firth, with a total cost implication of £4bn ($6.1bn).

West of Islay and west of Kintyre peninsula have been recently identified as other two major areas in Scottish seas that offer significant tidal energy potential.

ScottishPower Renewables (SPR), a subsidiary of Iberdrola, is building the world’s first commercial scale tidal energy project in the Sound of Islay situated between the islands of Islay and Jura.

GMT Rubber-Metal-Technic (GMT) is a worldwide leader in the design...

James Walker has the skills and in-house expertise to problem-solve,...

Reach for the sky: a tale of wood and wind