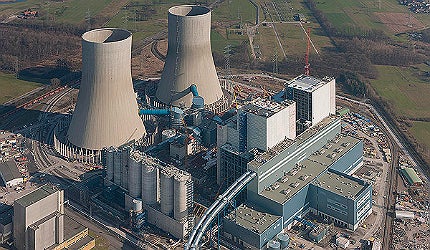 RWE Power, Germany’s largest electricity producer, is investing approximately €2.4bn ($3bn) to expand its Westfalen power station by erecting two new units (D and E), each with a capacity of 800MW. These units are said to be the most modern of their kind in the world.

Westfalen power plant is located in the Uentrop area in the city of Hamm in North Rhine-Westphalia, Germany. The two new units will supply electricity for around seven million people.

Construction on the expansion project was commenced in spring 2008. Unit D is scheduled to come online in mid-2012, while E is scheduled for late-2012.

The power plant was originally put into operation in 1963 with two coal-fired units, A and B, each rated at 160MW. These two units were permanently taken out of service in February 2011.

The plant was expanded in 1969 by adding a third unit (C) of 305MW. It was again upgraded in the late 1980s by adding a desulphurisation and denitrification system and replacing two 492ft-high chimneys with a single 656ft-high chimney.

THTR-300, a thorium high-temperature nuclear reactor rated at 300MW, was installed at the plant in 1985. It was, however, deactivated in 1989 due to ever-rising costs of production.

The nuclear facility was also partially demolished and was freed from its critical radioactive components. Leftover parts are safely locked up. Dismantling is expected to take place in 2027.

RWE Power is expanding the Westfalen power station in association with Gemeinschaftskraftwerk Steinkohle, a group of 23 municipal utilities from North Rhine-Westphalia, Hesse and Rhineland-Palatinate.

The two new units, D and E, are being erected next to the decommissioned THTR-300 reactor. There was a plan to build a nuclear power plant on a site adjacent to the reactor, but it was scrapped in 1995. Subsequently, the land was allotted to RWE Power for the two hard coal-fired units.

In February 2007, RWE Power submitted a planning application with the Arnsberg regional government for the construction and operation of the twin-unit power plant. The application was approved in March 2008.

RWE entered into a €450m ($666m) worth long-term power sale agreement with the 23 municipal utilities in February 2008. As per the agreement, these utilities will get 350MW of electricity annually for a period of 25 years.

Construction of the modern twin-units

The foundation stone for the twin-unit expansion project was laid in August 2008.

“Westfalen power plant is located in the Uentrop area in the city of Hamm in North Rhine-Westphalia, Germany.”

The construction works include erecting a building complex for engine and boiler houses, buildings for switching system, a water centre, four stair towers and seven silos, with capacities to store up to 353,146 cubic feet of limestone, cement and ash. The project also involves construction of two 540ft-high cooling towers.

New units and associated facilities are being assembled in such a way that they can fully be integrated into the existing site and do not require lots of external space.

Sliding construction techniques were applied to build the outer walls of the stair towers and silos.

Efficiency of the German power station

The twin-unit power plant has been engineered to attain cycle efficiencies of 46%, well above the European average of 36% for existing hard coal-fired plants. The plant will require just 80% of the coal consumed by other plants of same production capacity, and therefore, will emit fewer greenhouse gases.

Compared to older units of same capacity, the new units will cut down approximately 2.5 million tons of carbon dioxide each year.

Kraftanlagen München was contracted in September 2007 for the engineering, supply and installation of HP piping systems for the twin coal-fired power station. Austria’s second largest construction group Alpine was awarded a €135m ($212m) contract in April 2008 to carry out earthworks, concreting and interior works.

In April 2008, the French company Alstom won a €500m ($786m) contract to supply complete boiler islands and auxiliary equipment. Bilfinger Berger was awarded a €140m ($220m) contract to design, fabricate, assemble and commission high-pressure as well as medium and low-pressure piping systems for the two units.

A joint venture of Geldof and e-concept is working on the installations of wastage transport infrastructure. German consulting engineering group Schüßler-Plan is providing construction and project management services for the project.