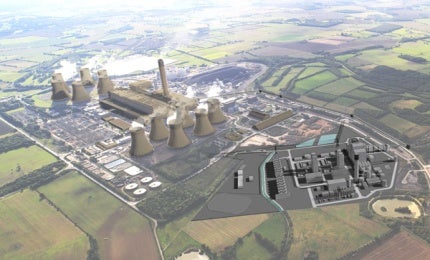 The new 426MW coal-based power plant will be equipped with a full-chain carbon capture and storage facility and will have the potential to co-fire biomass. It will be able to provide electricity to over 630,000 households, while capturing approximately 90% of the plant’s carbon emissions, which amount to approximately two million tonnes of CO2 per year. The captured CO2 will be transported by pipeline for permanent storage deep under the North Sea seabed.

Capture Power, a consortium consisting of Alstom, Drax and BOC (a member of Linde Group), has been created for the development, operation and implementation of the plant.

The project is currently undergoing the front-end engineering and design (FEED) study, which is funded under the £1bn CCS commercialisation competition programme initiated by the Department of Energy and Climate Change (DECC) in April 2012. Planning application is expected to be submitted by the end of 2014.

Approximately 1,000 construction jobs and 60 operational jobs are expected to be created.

Fuel supply and technology for the White Rose CCS plant

Most of the coal and biomass needed for the CCS power plant will be delivered by rail and stored at existing storage facilities at the Drax power station.

“Capture Power, a consortium consisting of Alstom, Drax and BOC (a member of Linde Group), has been created for the development, operation and implementation of the plant.”

The oxy-fuel combustion technology to be used will use oxygen instead of air for the combustion process, in order to obtain rich CO2 flue gas. This contains CO2 and water that can be cleaned and compressed for transportation, without any additional chemical separation.

White Rose CCS is one of two projects selected for funding under the UK Government’s £1bn CCS commercialisation competition programme, the other being the Peterhead CCS project.

Under this programme, in December 2013, Capture Power was awarded a multi-million contract by the government to conduct the FEED study for White Rose. In July 2014, under the European Union’s NER300 programme, the consortium was awarded up to €300m funding for this process.

Construction of the plant is expected to begin in 2015 following planning approval and a final investment decision.

The FEED study for White Rose also includes a transportation and storage solution called Yorkshire Humber CCS Trunkline, which is expected to be developed and operated by the National Grid Carbon.

“Construction of the plant is expected to begin in 2015 following planning approval and a final investment decision.”

The proposed pipeline project, involving a 75km-long and 24in diameter onshore pipeline, as well as a similar size subsea pipeline, will transport the CO2 from fossil fuel power stations and industrial plants in the Yorkshire and Humber regions to a permanent geological storage site beneath the North Sea.

The onshore pipeline will be buried approximately 1.2m below the ground and will transport liquefied carbon dioxide at a pressure of 150barg, while the transportation pressure of CO2 through the subsea pipeline is likely to be approximately 200barg.

The power plant, along with the CO2 processing unit, will be built by Alstom, while Drax will be in charge of operation and maintenance of the plants. The air separation unit for supplying oxygen for combustion will be built and operated by BOC.

Drax will also be responsible for trading services, site services, fuel supply, as well as the electrical connection for the CCS power plant.

Presently 40% of the UK’s electricity comes from coal and 20% from nuclear sources. With many of the old nuclear plants due to come offline in the next decade, and with the country’s 2008 Climate Change Act having established a legally binding target of reducing the UK’s greenhouse gas emissions by at least 80% by 2050, the generation of low carbon electricity at cheaper cost is a challenge.

CCS technology is expected to play an important role in this, with the country setting a target to deploy up to 12GW of CCS by 2030, which may rise to 40GW by 2050.