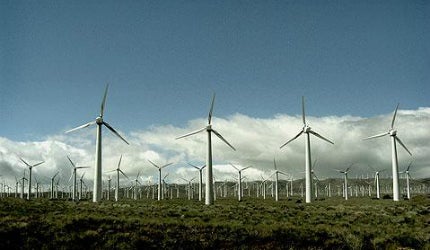 Whitelee Wind Farm is one of the biggest wind farms in Europe and was commissioned in May 2009. Located on Eaglesham Moor, 15km from Glasgow, Scotland, it initially had 140 turbines generating 322MW of electricity, sufficient to power 200,000 homes. It is also the first wind farm to be located close to a large population, with more than 500,000 living within a 30km radius.

The wind farm is owned by ScottishPower Renewables, which is a subsidiary of Iberdrola, one of the world’s largest developers of renewable energy. Iberdrola has an installed capacity of 10,447MW, with more than 57,400MW in the pipeline.

“The wind farm now has the capacity to provide power to 330,000 homes, more than the number of households in Glasgow.”

On 23 March 2010, the wind farm was temporarily shutdown when a blade fell off one of its turbines. A safety check was performed on all the 140 turbines before resuming operations.

In August 2012, ScottishPower Renewables submitted a planning application to the Scottish Government for a third expansion at the wind farm. The third expansion will add five turbines and increase the overall capacity by 12MW to 551MW.

Though the project received positive recommendations from the local authorities, it faced objections related to traffic control radars. These were posed by two aviation authorities: Glasgow Airport and National Air Traffic Services (NATS En Route). The MetOffice also objected to the project as its Corse Hill weather radar would be affected. ScottishPower overcame these objections by constructing another radar for aviation purposes through the data fusion technique.

The data fusion technique enabled the data from new radar to merge with the existing radar, giving air traffic controllers a full picture of the air space without the turbine plots.

Scottish Power Renewables announced its first extension at the wind farm by 36 turbines in May 2009. On 16 December 2009, the company received another approval from the Scottish Government to add a further 39 turbines to the existing wind farm.

The first extension of 36 turbines increased the output by 130MW, increasing the current capacity of 322MW (140 turbines) to 452MW.

The second phase of expansion added 39 turbines that increased the capacity by 141MW to 539MW. The second extension is located to the south west of the existing wind farm, north of Irvine valley and north east of Kilmarnock.

The wind farm is spread over 80km2 with 215 turbines after the two expansions.

Clyde Wind Farm is an onshore wind-based power project being developed by Scottish and Southern Energy (SSE), a British energy company based in southern Scotland.

ScottishPower started the construction of the wind farm, following its approval by the government, in 2006. A ground-breaking ceremony occurred for the project on 9 October 2006. The company signed infrastructure and turbine contracts for the wind farm three days later on 12 October 2006.

A substation and a control room were constructed at the site to monitor the wind farm. The substation construction was complete in April 2007. A 90km road was laid to transport the turbines, which has now become a popular cycling, walking and horse riding path.

The road construction was completed in June 2007 and the grid transformers were delivered to the site. The first turbine of the wind farm was erected in November 2007.

The first output from the wind farm came in January 2008. The entire project was completed in 2009 and was officially switched on in May 2009. The wind farm achieved full output three months later in July 2009. A £2m state-of-the-art visitor’s site was also constructed around the same time to encourage people to visit the wind farm.

The initial 140 turbines at the Whitelee wind farm are spread over 57km2. Supplied by Siemens, each turbine generates 2.3MW and measures 300ft to the tip of the blade. Each blade is 150ft in length.

The turbine makes 17 revolutions per minute turning at 360 degrees tearing the wind at a speed of 150mph. A foundation of over 30ft deep was dug into the peat to erect the turbines. These turbines were erected in an east to west direction to form a grid with 920km of cabling. The three transformers at the grid weigh 120t each.

Balfour Beatty, an infrastructure services firm, performed construction of the substation and control room at the site. The firm was also in charge of the design, supply and installation of electrical and control systems including the switchgear and cabling necessary for transporting power to the grid.

The main contract for the expansion was awarded to a joint venture between John Sisk and Son and Roadbridge in November 2010.

Balfour Beatty was awarded another contract in March 2011 for works related to the wind farm expansion. The contract involves all electrical infrastructure works and the supply of switchgear and 33kV cabling.

Siemens Power Generation UK was contracted to supply 140 turbines for the original project. The contract was worth £235m and was the biggest turbine order for Siemens at that time.

A €200m contract was awarded to Alstom for the supply of 75 turbines. The contract included supply of 69 ECO-100 and six ECO-74 wind turbines with a generating capacity of 3MW and 1.67MW respectively.

Scotland has an installed power of 36.5GW (exceeding its home demand of 10.5GW), which is 25% of Europe’s wind energy source. The installed capacity of wind farms in Scotland in January 2006 was 0.56GW, about 30% of the operating renewable capacity of 1.9GW.

In 2009, this increased to 1.8GW with 70 onshore wind farms. There has been a growing emphasis by the Scottish Government on reducing greenhouse-gas emissions including the world-leading emission reducing targets of 42% and 80% by 2020 and 2050 respectively. The country’s government has also set a target of generating 31% of electricity through renewable sources in 2011 and 50% by 2020, most of it coming from wind power.

In August 2009, the Scottish Government sanctioned 3GW of onshore wind energy projects with a further 3GW due for permission. Due to the strong legislation-led power market, Scotland has become a favourable place of investment for energy businesses such as Skykon, REpower and Nordex.