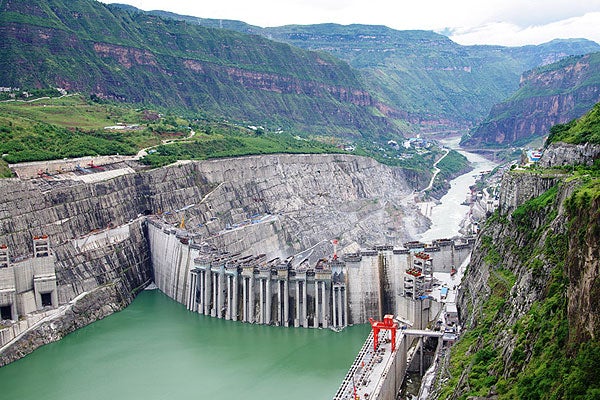 The project includes a dam, an underground power-generation unit and a flood discharge structure. It is mainly developed for power generation, and sediment and flood control while also improving the downstream navigation of the river.

The Xiluodu plant is made up of two power houses located on both sides of the dam. The power house comprises 18 Francis turbine-generators and an air-cooled generator with 855.6MVA output.

Each Francis turbine has an output capacity of 770MW while the air-cooled generator functions at a speed of 855.6MVA. The 1,350t generator rotor has a diameter of 13.7m and a height of 4m.

ABB’s HEC7/8 generator circuit breakers are installed at Xiluodu. Equipped with large short-circuits and breaking current, the generators help in cutting off the circuit in the event of fault currents and protect the generator, transformers and other core devices from damage.

Siemens’s gas-insulated-transmission line system is installed at Xiluodu. It has a power capacity of 3,900MVA at a voltage of 550kV and is capable of generating current at a rate of 4,500A. The GIL tubes provide high-resistance to fire and the tunnel can also be used as ventilation and service shafts for personnel. The GIL tubes are welded and are flexible in nature, increasing the tube flexibility and the operational reliability of the plant.

The Xiluodu River flow through the dam is controlled using five massive control gates, including a 1,600t gate, which is the world’s heaviest control gate, and four other gates weighing 1,200t each. The fixed hoist headstock gears operate the gates that block the water.

The Xiluodu power plant generates roughly 64TWh of power a year. The power is transmitted via the Xiluodu-Zhejiang and Xiluodu-Guangdong overhead transmission lines.

The Xiluodu-Guangdong HVDC project is a double 500-kV bipole system with a transmission capacity of 6,400MW. The power is transferred from Zhaotong station in Xiluodo to Conghua station in Guangdong via 1,286km-long transmission line.

The Xiluodu power plant’s construction began in 2005 and the first turbines were commissioned in July 2013. Putzmeister’s Telebelt TB110G was used to pour the concrete. The telescopic belt helps in moving the concrete down to dry aggregate.

Voith supplied Francis type turbines and air-cooled generator for the project. ABB was awarded the contract to provide HEC7/8 generator circuit breakers (GCBs) for the plant.

The converter valves and associated cooling system for the Xiluodu-Zhejiang UHVDC transmission project were supplied by C-EPRI Electric Power Engineering.

Putzmeister was awarded the contract to supply the Telebelt system of belt conveyors for laying concrete.

The installations of the world’s largest hydroelectric turbine generators have begun at China’s Xiangjiaba Dam.