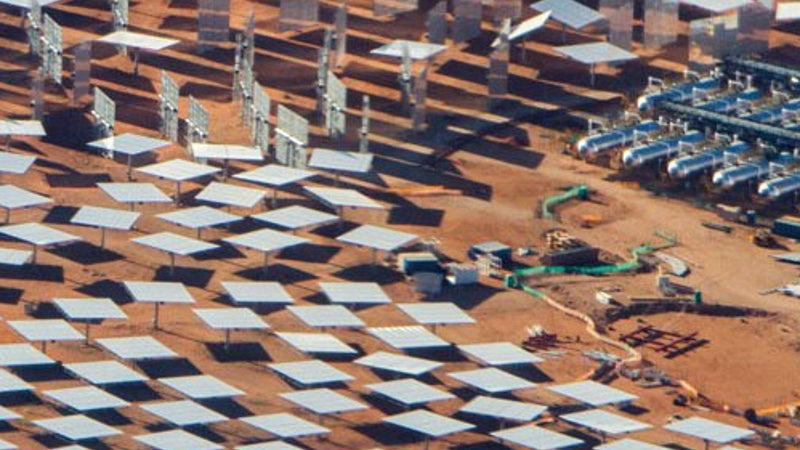 The site will be spread over 850,000m², making the plant the biggest solar power complex in Africa when combined with the adjacent Kaxu Solar One solar power plant.

Xina Solar One is being undertaken by a consortium of companies including Abengoa Solar (40%), Industrial Development Corporation (IDC, 20%), the Public Investment Corporation (PIC, 20%) and KaXu Community Trust (20%). Abengoa is developing the project on behalf of the consortium.

The solar power plant is expected to cost around $880m to develop, and will generate 380GWh of power a year.

The environment and social impact assessment for the project was completed in 2014 and financial closure was achieved in 2015.

Construction commenced at the end of 2014 and commissioning work began in 2016, which included various converter tests.

The powerhouse of the Xina Solar One power plant will be a two-storey building containing the steam turbine and generator, and a generator transformer and a small substation will be constructed adjacent to the building.

An auxiliary steam generator, overhead power lines, abstraction point on the Orange River, water supply pipelines, and storage and suspension reservoirs, along with the fire protection supply, are also planned to be developed as part of the project.

Electricity generated by the plant will be transmitted to Eskom’s Abengoa-owned Paulputs substation via a 3km-long, 220kV transmission line.

The Xina solar plant will use cylindrical-parabolic collectors and a thermal storage system to generate electricity.

Parabolic concentrators made of curved mirrors track the sun and concentrate solar energy onto a synthetic oil-filled absorber pipes.

The oil in the pipes will be heated to 395°C and transferred to a heat exchanger. The exchanger will then heat water to generate steam, which turns the turbine and generates electricity.

Heat from the oil will also be used to heat 47,155t of molten salt stored in thermal energy storage tanks to generate electricity even after sunset for a period of up to five hours.

The African Development Bank is contributing $141.5m for the construction of the Xina Solar One plant.

The solar power plant will be capable of meeting the electricity needs of more than 95,000 households and help prevent 348,000t of carbon emissions a year.

“The site will be spread over 850,000m², making the plant the biggest solar power complex in Africa when combined with the adjacent Kaxu Solar One plant.”

It is expected to generate more than 1,300 jobs during the construction phase, and a further 45 permanent jobs during operational phase.

Construction of the plant will also help to meet South Africa’s target of generating up to 17,800MW of renewable energy by 2030.

Abengoa subsidiaries Abener and Teyma have been designated as the engineering, procurement and construction (EPC) contractors for the project.

Eltherm was awarded a contract to supply a heat tracing system for the power plant.

Mott MacDonald was lenders’ technical advisor throughout the project’s financing, and has also agreed to monitor the plant during its construction phase.

Arudra Engineers offers a wide variety of chemical cleaning and...

MBH Energy has been in operation since 1996, specialising in...