“When I first looked at the energy business sector, renewable energy was the easiest to deploy,” says Fukuizumi. “Governments provided incentives, and Japan adopted solar energy readily.” However, the islands of Japan are full of mountains, so there are limited flat areas where you can place panels, and when the government tariffs came to an end, deployment slowed considerably.

Instead, Fukuizumi sees hydrogen as the big player for green energy in the future. “For me, it’s the next main change of the energy transition business,” he says. “When I joined the panel discussion at CERAWeek in Houston [in March 2022] major oil & gas players were talking about these ideas – seriously considering new energy.”

Fukuizumi says that the trend he is seeing is Big Oil and Gas moving to carbon-free hydrogen, starting with existing infrastructure and assets. He is a keen observer of the work such companies are currently doing to reduce their CO2 footprint. First by capturing CO2 and moving to produce blue hydrogen. Using profit to invest in new energy areas. “Rome wasn’t built in a day,” he says.

“There must be some economic sense. Based on economic principle, what is the most cost-effective energy for carbon neutral fuel? Not starting from 100%, but maybe a few percent and then gradually increasing. That is the main character of the energy transition business.”

The role of hydrogen over the next decade

Hydrogen, however, is difficult to transport over long distances. “Unless there is a pipeline already designed for that, you really cannot transport that amount of green hydrogen energy over a long way. So, it tends to be locally produced and locally consumed,” Fukuizumi explains. This means that the first industries to make full use of hydrogen power for their processes will be based in the same locations.

“For example, ammonia – an industrial material, sold all over the world – tends to be locally produced, locally consumed, both as material and as [liquified] energy. It is already estabished, with an international market by large vessel carrier. By using such kind of infrastructure, I think they’re going to expand their export of ammonia with a share of green, more and more. Starting from a minor percentage.

“But the green commodity of ammonia itself – validated with high carbon-neutral content – will mean a change in the price range. So, I would expect the use of hydrogen locally to produce the material for the industry. That’s probably the way forward.”

One energy intensive industry that is already making the transition is steelmaking, says Fukuizumi. “For example, in Australia, where the iron ore is produced, normal business is to export the ore to another country – such as Japan or Germany – to make the steel by coal-based furnace,” he explains. “Now, these importers have started to think about increasing the use of electric furnaces, first for recycled steel, then, for new steelmaking.

“In Australia, where the ore is, they have started to think about production by locally produced hydrogen. As a total supply chain, this portion of the steelmaking is down in Australia with the green hydrogen, which starts from green pellet making and then brought over. Then the electric furnace is using renewable power to make this steel – they’re starting to think of the process change gradually. They are thinking more practically – by starting to deploy electric furnaces.”

What should industry be looking at to decarbonise?

To achieve the goal of rapid global decarbonisation, industry needs to look closely at where in the supply chain it can reduce CO2 emissions. Mitsubishi Heavy Industries Group (MHI) has started this discussion with its customers, and Fukuizumi explains what they need to consider before moving forward.

“We have received many requests for meetings from various industries in Japan, as well as overseas right now,” he reveals. “Japanese industry is quite keen to continue their business considering the upcoming regulatory issues – they want to prepare for SCOPE 1 and 2 reductions [the Greenhouse Gas (GHG) Protocol]. When we meet with them, we start with energy conservation and the benefits of CO2 footprint reduction, as well as profit.

“Next is to start thinking of carbon neutral energy from external sources – such as renewable energy power. Then they must consider not only their factories in Japan, but also regional production. You have lots of the supply chain in the South Asia Pacific area, many Japanese industries have subsidiary companies in Southeast Asia. So, they need to consider the whole SCOPE 1 and 2 reductions, not only the Japanese factories, but also those in Southeast Asia. You must include the whole global supply chain when looking at reducing CO2 emissions.”

Sometimes the customer may want to include an optional “Green Project” or CO2 reduction in a contribution project. Often there are agreements in place in a particular country, such as a carbon credit scheme. All these strategies need to be weighed, points out Fukuizumi.

Driving down costs with regulatory incentives

Reducing costs of green products can be aided by regulatory incentives and the Biden administration has already opened some of these up to industry in the US. Fukuizumi says that Japan is considering a subsidy system – financial support to the industry not only for CapEx, but also OpEx, and additionally the Australian government is discussing incentives too.

“The private/public sector is more proactively putting their money and financial help into energy transfer businesses,” says Fukuizumi. “There are also regional incentive programmes. Not only just one country, but country to country bilateral agreements. They’re going to probably create some matching fund or something like that,” he predicts.

“Although this is just a guess at the moment, I am starting to see, for example, that the country of Singapore is quite proactive. So, for them to establish an IT hub in Southeast Asia, they’re going to need to establish a carbon neutral energy supply at their location. Such proactive movements by the public sector are happening everywhere.”

MHI is well placed to cooperate and collaborate with these different sectors. This invaluable experience can help its customers to navigate the challenging waters of their decarbonisation journey.

“We are getting so many inquiries from industries with whom we have worked with in the past,” comments Fukuizumi. “Based on our past business relationships with them, we are the energy equipment provider and then also the machinery equipment provider. So, we have a long history of dealing with industrial, large-scale CO2 emitters.

“For example, steel. We have been providing machinery for the steelmaking process as well as the power generation equipment and these clients are heavy users of our equipment, so naturally they started to consult with us on how to reduce their CO2 emissions. Petrochem industries as well.

“Now, this energy transition business is probably not from the power supplier side, but from the energy users’ side, because they wanted to seriously consider SCOPE 1 and 2 reductions and then they are wondering, how do they do that? Our relationship with the industry is probably the reason that we have so much interaction with them, so quickly.

“We also have the internal capability to come up with solutions. Including a CO2 capture system. I think that is the reason why we are in a good position to talk about CO2 emission reduction, or the energy transition business, compared with other large competitors.”

MHI is continuing to evolve and is building a large-scale testing and validation facility in Takasago Machinery Works in Hyogo Prefecture, Japan – dubbed “Takasago Hydrogen Park”. Hydrogen will be produced on-site using water electrolysis. Hydrogen will then be transferred to a storage facility, before being used as fuel at the adjacent hydrogen power validation facilities.

“So pretty much the usage side is ready,” says Fukuizumi. “What isn’t ready is the supply chain side. One of our projects – in Utah, US – involves a green hydrogen production facility, adjacent to a natural gas combined cycle power plant. We committed to deliver that hydrogen, starting as a partial mixture with natural gas on the combined cycle, and then finally to achieve 100% green hydrogen by 2045. That is an ongoing project, and we’ve already got a Department of Energy loan guarantee for it.

“We have also invested in a green hydrogen/green ammonia project in South Australia called H2U. Working together with local partners to see how we can deliver green hydrogen and green ammonia, at a competitive cost to the local industry, fast.”

Fukuizumi explains that by taking on such projects, MHI will be better able to understand the market, and be able to configure pricing and added value to their services more accurately.

Looking forward to a renewable future

This winter, especially in Europe, shortages of natural gas – brought about by recent geo-political tensions – could quickly lead to real hardship for citizens whose countries rely on fossil fuels for energy production. While one answer is a more diverse portfolio on energy sources, another is to invest more heavily in renewables. Even with added costs attached, this route can give additional energy security.

Looking forward, Fukuizumi thinks that promising investment opportunities in traditional renewables such as wind and solar are currently limited as producers are working on slim profit margins. But the financial industry is still looking for opportunities to invest in the energy transition. And with some nations looking more at security issues right now, the ESG side of the business may take a back seat for a while. But Fukuizumi also believes that hydrogen – as a clean fuel, a carrier and a storage medium for energy – is good business, and by that implication, investment will almost certainly continue.

There has been an irresistible surge of interest and investment in hydrogen (H₂) and ammonia (NH₃) as potential pathways to net zero CO₂ emissions over the past few years. There are many good reasons to believe that these two gases will be vital to speeding up decarbonization across a range of settings, from power generation through heavy industry and transportation. Whether countries and industries decide to focus on one or the other, or both, will depend on their specific circumstances — from geography and availability of renewables to the supporting infrastructure. However, while momentum is building in terms of policy support, deployments and the technical solutions needed to make wider use of hydrogen and ammonia a reality, this is still a nascent industry that has many challenges to overcome. This paper will show why hydrogen and ammonia are vital.
By Mitsubishi Heavy Industries 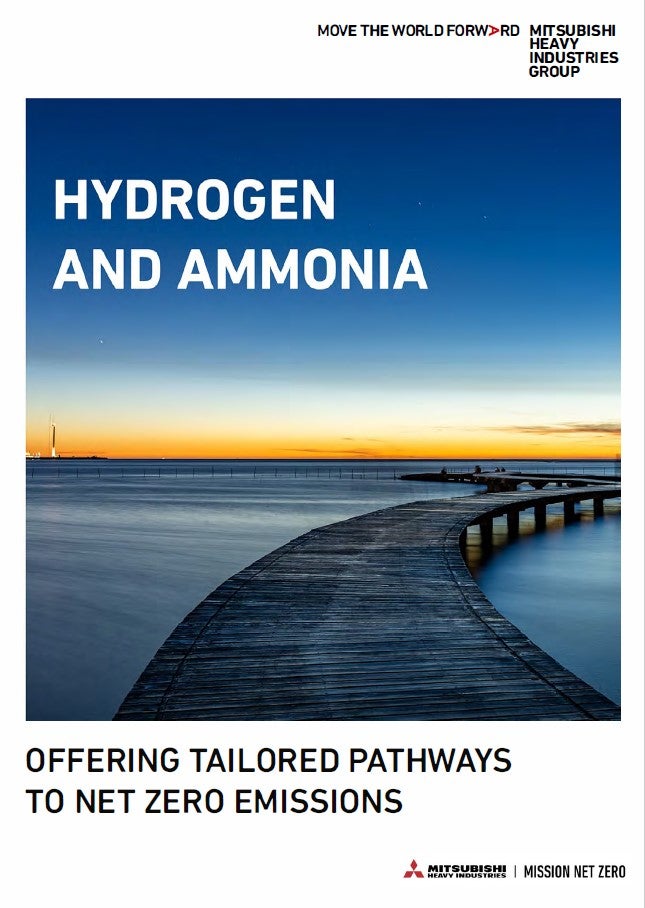