Hydrogen is widely seen as a crucial weapon in the fight to avert the catastrophic consequences of a post-2°C world. A world in which, according to the Natural Resources Defence Council, rising global temperatures would cause widespread human and agricultural devastation while disproportionately affecting lower-income communities.

Pre-pandemic, the urgency of facilitating a global switch to green energy across multiple industries led Japan to request a detailed investigation by the International Energy Agency into how hydrogen could be part of the wider solution. Their recommendations included establishing a “role for hydrogen in long-term energy strategies,” and stimulating “commercial demand for clean hydrogen”.

A recent report by Hydrogen Europe detailed how more than 30 countries have already begun implementing their own hydrogen strategies, the main goals of which include reducing emissions, especially in “hard to abate sectors” like “industry, mobility, electricity balancing and heating”, diversifying energy supplies, integrating renewables, fostering economic growth, and more.

Yet despite its potential to be a cost-effective “carbon-free energy carrier” with an array of industrial applications, the report says there is currently “no public infrastructure, no public market and no market regulation for hydrogen”. Instead, hydrogen is mainly used as “feedstock to produce chemical products” like ammonia and methanol, or to de-sulphurise oil producing kerosine, gasoline, and diesel.

According to a report by Inside Energy and Environment, the EU defines low-carbon hydrogen as: “Hydrogen with an energy content that is derived from non-renewable sources, and that meets a GHG emission reduction threshold of 70% compared to fossil-based hydrogen”.

Analysis by power-technology.com of GlobalData’s latest data on low-carbon hydrogen plants shows that global production is primarily powered by natural gas and coal, despite more countries opting for renewable energy.

The same analysis shows the US and Canada have the greatest annual low-carbon hydrogen capacity.

Hydrogen Europe’s report sketches various ways in which hydrogen produced by natural gas can be effectively decarbonised via the use of modified technologies, such as carbon capture and storage (CCS) using autothermal reforming plants, or methane pyrolysis. Yet associated costs and difficulties in achieving 100% CO2 capture make these approaches potentially less promising than alternative longer-term options. Additionally, the colour of hydrogen produced using these methods ranges from grey to turquoise, falling short of the gold standard whereby climate-neutral green hydrogen is produced using renewable energy or biomass.

Despite the hydrogen industry only being pregnant with promise, some countries have made bold plans to dramatically scale up green hydrogen production to 2040. According to our analysis of GlobalData’s data, prior to the invasion of Ukraine, Australia and Russia were leading the way with respect to planned capacity; however, current estimates are now subject to considerable uncertainty.

By contrast, although numerous countries plan to increase their total number of green hydrogen plants, this does not necessarily equate to a significant increase in total annual capacity. Russia and Kazakhstan have planned far fewer plants than many other countries yet are due to have much greater annual capacity over the next 15–20 years.

One key hard-to-abate sector thought to be eligible for decarbonisation using green hydrogen is the iron and steel industry. According to a COP26 report by the Leadership Group for Industry Transition, steel production is thought to account for around 10% of global CO2 and 7% of global greenhouse gas emissions. The paper argues that the industry is expected to grow by up to a third between now and 2050, and that without a radical decarbonisation strategy, future emissions could use up “almost 20% of the remaining global CO2 budget for a 50% chance to keep global warming below 1.5°C.”

Research by Mitsubishi Heavy Industries’ Primetals Technologies found that approximately 70% of current global steel production capacity (i.e. the share currently based on coke and coal) is suitable for a switch to hydrogen power. Producing a tonne of steel requires around 55kg of hydrogen. To successfully decarbonise the industry based on current production figures, this translates into needing 72Mt of annual green hydrogen capacity, with 500GW of electrolyser capacity.

Using this estimate as a benchmark, our analysis of GlobalData’s green hydrogen database shows that even if all currently planned green hydrogen plants become fully operational on schedule, maximum global capacity would fall significantly short of this target. This is especially the case since new green hydrogen capacity will by no means be exclusively reserved for the steel industry.

Primetals has developed a range of solutions to the challenge of cleaning up the steel industry while global green hydrogen capacity increases. According to recent research, direct reduction technologies hold the greatest promise for rapid decarbonisation. The paper says: “The direct reduction process based on hydrogen is one of the future steel production routes with the highest potential for a substantial reduction of CO2 emissions.”

Primetals’ has a long-standing partnership with MIDREX®, whose technology already has the capacity to produce direct reduced iron from both natural gas, hydrogen or a mixture of both, up to and including 100% H2.

The company is also developing new technologies that complement the likes of MIDREX, which relies on agglomerated iron-ore pellets. “We also have fluidised bed technologies that can feed iron ore directly without pelletising,” says Fleischanderl.

Primetals deployed its FINORED-based fluidised bed technology in Australia and Venezuela at the beginning of the millennium. This technology was also basis of the first process step for FINEX®, jointly developed by Primetals Technologies and POSCO, and now fully operational at a Korean plant run by Posco, which could also utilise hydrogen. Fleischanderl describes another flagship initiative:

“One of our lighthouse development projects where we have just recently commissioned a pilot plant in Austria at Voestalpine is HYFOR (Hydrogen-based fine ore reduction),” says Fleischanderl. “That is a missing portfolio element; no one has ever done this.

“A lot of [iron] ores are extremely fine from the beneficiation; sub-micron iron ores that are difficult to pelletise. We are developing a technology that allows us to feed this ultra-fine iron ore directly based on hydrogen reduction.”

By switching to hydrogen, Primetals estimates an immediate CO2 reduction of approximately 91% could be achievable compared with the coal-based BF-BOF baseline. However, as its report also states, decarbonising iron and steel via hydrogen direct reduction requires an entirely renewable electricity system. This represents a significant hurdle on the road to a truly green global economy.

Despite the lack of ideal circumstances, Dr Fleischanderl stresses the importance of not allowing the pursuit of perfection to become the enemy of progress. “Any option is better than sit and wait,” he says. “The first implementations targeting green hydrogen might happen, but meanwhile we have to go for the options.

“At least if we go for direct reduction technology and use natural gas, we already can decarbonise by two-thirds compared to the traditional route of coal-coke based blast furnaces.”

He also describes the benefits of “larger-scale electric arc furnaces” in tandem with renewables and recycled scrap to produce low-carbon steel, and carbon capture combined with direct reduction as viable “bridging technologies” on the road to net zero. Additional short-term optimisation strategies could allow companies to quickly reduce emissions by up to 30%, although this represents an upper limit.

Primetals is also working with MIDREX on numerous ground-breaking efforts to maximise currently available solutions that have intrinsic longevity and adaptability to take advantage of future green hydrogen supplies. Fleischanderl gives the example of two large-scale Russian plants based on an innovative design that can utilise hydrogen whenever it becomes available at scale. They can also gradually alter the proportions of natural gas and hydrogen in a stepwise fashion until both plants run entirely on the latter.

The future of hydrogen and steel

Promising technological solutions to decarbonising steel do not automatically remove numerous barriers threatening to derail the push towards net zero. One of these is the issue of limited raw materials, which thwarts efforts to utilise scrap metal to reduce reliance on iron. According to Fleischanderl, “recycling and melting scrap would be perfect. Unfortunately, scrap is limited so we have to go back to iron ore.”

This leaves the industry with only two options to produce steel involving either carbon or hydrogen, resulting in a circular problem until the latter can be produced at scale. Fleischanderl points to connected issues, such as rising energy prices, and substantial asset lifetimes of around 40 years for ironmaking plants, raising significant challenges for potential investors. To counteract industry hesitancy, he cites initiatives like the European emissions trading system, which may have already galvanised steelmakers into pursuing “accelerated pathways” towards decarbonisation, due to the financial incentives gained by avoiding or reducing associated costs.

Another looming obstacle to using future net-zero hydrogen to decarbonise steel is that the sector faces stiff competition from many other industries looking to leverage the planned uptick in production. Our analysis of GlobalData’s research suggests that nature’s green oil has a whole host of hungry mouths to feed, the most ravenous of which is set to be the transportation sector.

This suggests future supply will have to exponentially increase to meet multifaceted demand. Fully decarbonising steelmaking with hydrogen-based direct reduction requires a gigantic effort from all stakeholders to ensure far more future capacity is added to the system, raising considerable challenges related to the parallel need to ramp up renewables between now and 2050. Clean steel made from clean hydrogen needs clean electricity at scale and myriad other measures to enable steelmaking to restructure.

An EU Commission report into the feasibility of decarbonising steel with hydrogen laid out various challenges faced by the sector, such as an estimated initial cost increase of around 33% per ton of steel compared with relying on coal. The report also suggests that a potential knock-on effect of more expensive green steel could lead to increased demand for alternative materials, such as aluminium in the automotive sector or wood in the construction industry. This could lead to enhanced energy efficiency from lighter vehicles and natural carbon capture from sustainable forestry, which could offset global emissions.

Sustainable carbon-neutral clean steel is thought to be theoretically achievable; however, based on the current trajectory this may prove elusive prior to 2050 unless a harmonised plan of action to address the most urgent issues can be successfully forged in a relatively short timeframe. Unprecedented geopolitical, financial and industrial cooperation on a global scale will be necessary to avert the worst effects of the climate crisis haunting the horizon.

For those invested in the clean energy, hydrogen and steelmaking industries who are willing to bet big on the prospect of a truly sustainable economy powered by nature’s green oil, the short-term risks may appear off-putting, yet the potential future rewards are considerable and far-reaching. A cleaner hydrogen-powered future starts now for those who are ready to become industry trailblazers.

Stronger together: CCUS Hubs and Clusters

Carbon dioxide (CO₂) capture, utilisation and storage (CCUS) hub and cluster networks could play a key role in efforts to scale-up carbon capture technologies. These networks exploit the agglomeration benefits of having multiple emitters in a single location by utilizing shared infrastructure to capture, transport and store CO₂ from power generation and industrial flue gases. Connecting multiple local emitters to common CCUS infrastructure has many benefits – this paper will explore them.
By Mitsubishi Heavy Industries 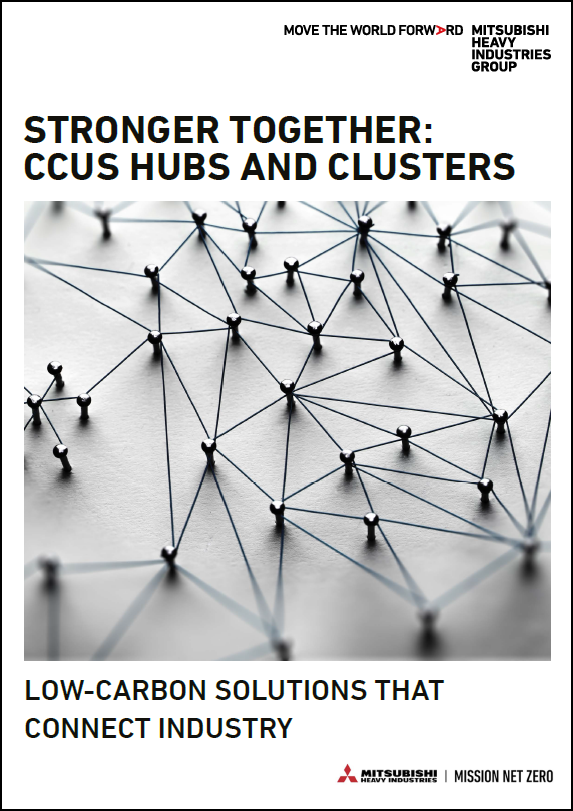