In Association with HERE Technologies

Countries around the world are scaling up new technologies and releasing policy plans with the ambition of reaching net zero by the middle of this century. One of the areas where change is happening the most rapidly is in the electric vehicle (EV) sector: Sales of EVs doubled in 2021 on a year-on-year basis, to hit 6.6 million worldwide. Back in 2012, just 120,000 electric cars were sold, according to data from the International Energy Agency (IEA).

The future of connected navigation

In order to build compelling embedded navigation experiences that rival smartphone mirroring, automakers must adopt new approaches to navigation system development and deployment. Matching the rapid design cycles of the consumer’s other digital devices will require an approach that favours pre-integration of location services and component re-use, while still retaining OEM ownership. This whitepaper provides an analysis of the current state of embedded navigation and introduces the next-generation connected navigation trends. It describes how we can build the connected navigation future, using Software-as-a-Service to empower automakers.
By HERE Technologies 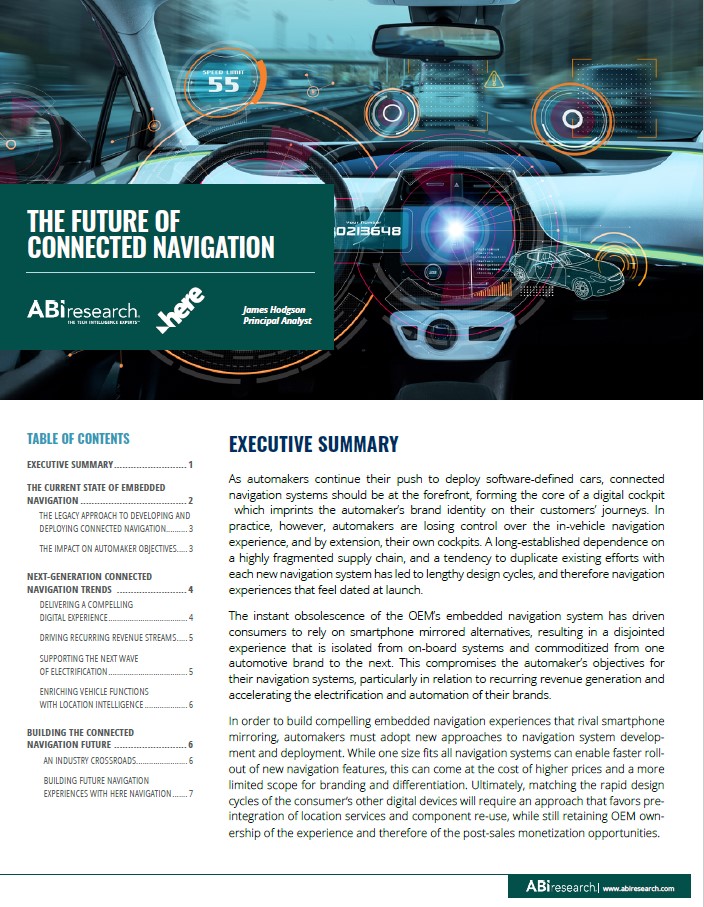 But while increasing EV production is good for the climate, this rapid transition brings with it challenges. Manufacturing supply chains need to be able to keep up with booming factory orders: Several car manufacturers have had to halt production over the past year because of problems with the supply of microchips.

In November 2021, Volkswagen halted production at two German factories, and in February 2022, Ford suspended production at three assembly plants in the US and Mexico. Manufacturers also will need a steady supply of critical minerals such as lithium and cobalt for batteries and other associated technologies.

While all major automakers have made long-term commitments to EVs, a May 2022 study, The Automotive Sector and Climate Change, from the think tank InfluenceMap found that not all automakers are planning to make enough EVs by 2030 to keep in step with Paris Agreement climate goals. Many automakers have not committed to such aggressive timelines. It’s important to consider that such commitments have major operational considerations such as re-engineering supply chains and re-tooling manufacturing facilities for these new vehicles.

Another major challenge for the widespread adoption of EVs is the massive number of new charging points that will be required: the 225,000 that existed in the EU in 2020 need to increase 72-fold to reach 16.3 million by 2050, according to modelling by the European Commission. If both the public and private sectors don’t achieve this jump, there is a risk consumers won’t feel confident buying electric vehicles due to ‘range anxiety’.

If policymakers alone cannot close this gap, there are opportunities for companies in the private sector to address this range anxiety and help boost the uptake of EVs.

HERE Technologies is one such company working in this space. The company is the leading location platform company, specialising in software and data solutions for connected driving, which is the digital in-person experience of modern cars.

He adds that as the industry matures, there will be further opportunities to leverage electric vehicle data such as pattern analytics and machine learning for making personalised EV driving recommendations or helping the driver plan for other necessary downtime such as EV repair and maintenance.

HERE Technologies has deep experience in the automotive industry, which puts it in prime position to make capitalise on business opportunities that will come with the transition to electric vehicles and connected driving. “We harness the power of location data to make EV driving more enjoyable and by managing range and infrastructure anxiety,” says Amin.

As growth in the EV market continues to increase, some have suggested the world could be nearing a tipping point when volatile early adoption trends are overtaken by mainstream demand, and EVs (and thus electric vehicle data) will very quickly grow to occupy most – then all – of the car market.

“There are three things that need to happen in the transition to clean road transport,” says Ben Nelmes, from independent transport research organisation New AutoMotive. First, consumers need to be convinced that EVs are “a practical and realistic option” for them. Second, car manufacturers need to “make and sell a wide range of EVs” that suit consumers’ needs.

Third, says Nelmes, there are a huge number of polluting internal combustion engines that need to be retired and replaced with electric motors and batteries. "It is only then that we will have a fully car-electrified market," he concludes.

One country that has already gone some way to fully achieving these three things is Norway. Over the course of 2021, 65% of new car registrations were battery electric vehicles (BEVs), and 28% were hybrids (22% plug-in hybrid, 6% non-plug hybrid), according to publicly available data collated up to October 2022 from ofv.no, the Norwegian Road Traffic Information Council. This represents massive growth: as recently as 2018, 31% of cars sold were BEVs, increasing to 42% the following year, and 54% in 2020.

The success of EVs in Norway is the result of a series of wide-ranging policies that have transformed the traditional perceptions of EVs as too expensive or lacking in range. Robbie Andrew, from the CICERO Center for International Climate Research in Oslo, highlights more than a dozen different taxes, subsidies and regulations that shape the country’s automobile market.

“Norway is certainly leading, and the government’s incentives are a big part of that,” says Andrew, but he says other markets are starting to follow the same curve.

Research company BloombergNEF has said in a July 2022 story, US Crosses the Electric-Car Tipping Point for Mass Adoption, that countries cross the EV tipping point when EV sales pass 5% of overall car sales – a benchmark Norway passed back in 2013. Data shows the first six months of 2022 saw the US join China and a host of European countries in crossing this benchmark. In all, at least 18 countries have reached the 5% tipping point, with car markets in Canada, Australia and Spain now also approaching it.

In Europe as a whole, the uptake of hybrid vehicles and BEVs is beginning to increase rapidly, shows data collated in October 2022 (New registrations of electric vehicles in Europe) from the European Environment Agency. The BEV and hybrid share of total registrations across the continent increased from 3.5% in 2019 to 11% in 2020 – or 550,000 to 1,325,000 units.

Manufacturers are also adjusting production lines to meet new EV demand in certain markets, shows data. The UK and Germany now both produce more than 20% EVs from their car factories, according to data from these countries’ respective industry bodies, while China – the largest producer of cars by volume – now produces 25% EVs, shows data shared by the analyst Lauri Myllyvirta.

The examples of those countries that have crossed the 5% EV sales threshold show that it is possible to assuage concerns such as price and range anxiety as markets mature. And when that happens, the final piece of the puzzle in the transition to an EV market is the retirement and replacement of cars powered by internal combustion engines (ICEs) that will remain on the roads long after they are sold as new.

This will take time: in the UK, there are currently 32 million cars on the road, but only around 400,000 cars are written off each year, according to Churchill Car Insurance.

Nevertheless, the combination of suitable policy support as well as more innovative solutions from companies such as HERE Technologies, means there is no reason why EVs cannot continue beating expectations and take the car market by storm sooner than anyone expects.

The future of connected navigation

In order to build compelling embedded navigation experiences that rival smartphone mirroring, automakers must adopt new approaches to navigation system development and deployment. Matching the rapid design cycles of the consumer’s other digital devices will require an approach that favours pre-integration of location services and component re-use, while still retaining OEM ownership. This whitepaper provides an analysis of the current state of embedded navigation and introduces the next-generation connected navigation trends. It describes how we can build the connected navigation future, using Software-as-a-Service to empower automakers.
By HERE Technologies