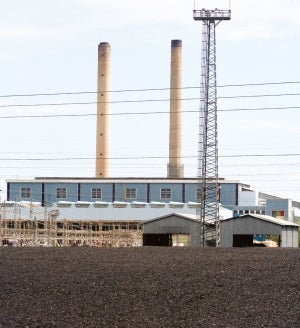 Namibia, like its fellow southern African power pool members, is currently facing an electricity shortage. Namibian generation capacity is only around 380MW with demand in excess of 450MW. At the moment, the shortfall is made up by electricity imports but member countries are struggling to meet their own needs, so these imports are no longer reliable.

On evaluation of the countries options for increased power generation, an attractive option was to rehabilitate NamPower’s Van Eck Power Station situated in Windhoek. This 120MW coal-fired plant was built in the early seventies and was recently approaching the end of its life. In its condition, with virtually all major equipment in need of replacement and the constantly increasing cost of coal, operating the plant had become completely uneconomical.

After a comprehensive feasibility study was completed by American company Black & Vetch, NamPower took the decision to embark on a NAD300m project to restore the aging power station to its former glory. In addition, new and modernised equipment would be added to ensure ongoing economic efficiency and reliability.

A decision was also taken to install equipment that could operate with a locally manufactured and more cost efficient ‘green coal’, integrated with normal imported coal to fire the four boilers. This green coal is derived through a torrefaction process of harvested invader bush, which is then pelletised and distributed into the furnace along with coal.

South African company MBH Energy was contracted by NamPower to carry out the rehabilitation job, which included renewing and improving the firing equipment on all four boilers to ensure successful and efficient firing of the mixed fuel.

The scope of work included a range of new and modernised equipment. Firstly, in order to successfully introduce the more brittle green coal into the furnace area without pulverising it, the decision was taken to replace all the old mechanical coal feeder spreaders with new DSC underthrow feeders. The new feeder design combines air assist with an underthrow rotor mechanism. This unique design discharges the fuel in the underside of the rotor, enabling the blades to contact the coal for a longer period of time. This design feature, in conjunction with the pneumatic distributor plate, facilitates a more horizontal trajectory of the fuel, which distributes the fine particles more consistently onto the bed area. This promotes better combustion efficiency by reducing the carbon content of the ash. This system is ideal for distributing fuels of inconsistent size and is a first for the African continent.

"MBH Energy will bring the four boilers back into service for NamPower by June 2014."

Another upgrade to the Van Eck Power Station is the replacement and modernisation of the moving DSC roto grate system. The modernisation includes a new support beam structure, air seals, chains and grate bars, as well as a new arrangement for the rear tuyeres. All of these components have been developed and drastically improved over the last two decades. The grit re-firing system has also been rebuilt and optimised, with ten new re-firing lines including cinder return nozzles and return pick-up assembly. The changes made to the grate and furnace system will ensure better performance and less down time for the plant, which will show increased annual productivity and boiler efficiency.

MBH Energy will bring the four boilers back into service for NamPower by June 2014. The Van Eck Power station is expected to be running at its full capacity of 120MW before 2015, allowing the country to reduce its energy imports from neighbouring countries.