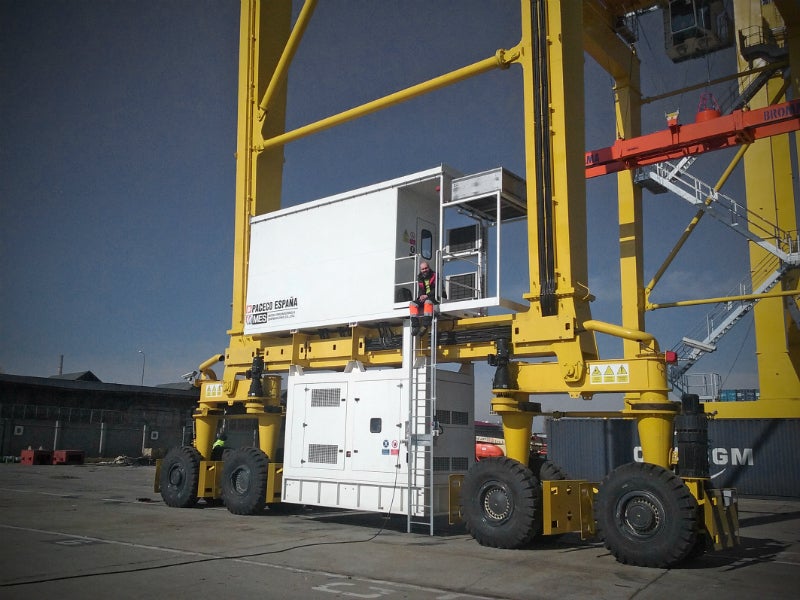 Covering an area of almost 40km², the Port of Constanta, in Romania, is the largest port in the Black Sea and is able to handle 100 million tons of cargo per year.

In addition to its privileged location, the port is also connected to two pan-European transportation corridors that link Europe to Central Asia. Each day, some 200 containers are transported from the Port of Constanta through the Danube, to countries in Central and Eastern Europe such as Bulgaria, Serbia, Hungary, Austria or Germany.

HIMOINSA’s 458kVA generator sets will supply power to two Rubber Tyred Transtainer© (RTG) cranes of PACECO España, a company that designs, manufactures and develops container-handling equipment. The cranes have been designed with state-of-the-art technology to optimise container handling in the port’s terminals, to ensure operational safety at all times and to enable all operations to be automated in the future.

HIMOINSA will supply continuous power to the RTG cranes that load and unload containers in the port, and will provide machines designed to work 24 hours a day, 365 days a year, with very brief stops for maintenance and continuous container loading and unloading cycles. The two HVW-400 T6 units will be perfectly synchronised with the cranes’ on-board systems.

The HIMOINSA Engineering team, together with PACECO, has designed gensets to tailor them to the specific needs of RTG applications. Both generators are ready to work very hard, with very large peaks in power demand.

To cope with these abrupt load variations and to minimise running costs, the design incorporates engine speed control and cooling optimisation solutions, which are intended to reduce fuel consumption by approximately 20%.

To meet the needs of a seaport market that is increasingly demanding as far as noise is concerned, the gensets are housed in a soundproofed canopy. Its main crane chassis brackets and anchor points have been designed to withstand the force exerted on all three axes, which is caused by motion during the transportation of the crane and when it is loading or unloading containers.

As they are installed in moving vehicles, the fuel tanks, with sufficient capacity for a full day’s work, incorporate air chambers that prevent the fuel from swaying to and fro. This kind of motion causes errors when reading the sensors and can produce premature mechanical fatigue of the tank and its components.

HIMOINSA’s design has been adapted to make it possible to carry out maintenance work on the generator set and on the actual crane itself. Coolant changes are carried out from the side of the generator set by means of an electric pump, removing the need to access the interior. Lighting has been added to the control panel and in the interior of the genset to facilitate supervision and control tasks.

As the application requires the equipment to cope with very abrupt load variations, an oversized alternator was included in the genset with a non-standard voltage controller, which provides the dynamic response that PACECO España was looking for.

The gensets’ control unit communicates with the crane’s PLC while the units have been fully integrated with each crane’s SCADA and on-board systems. This ensures a smooth operation, while it makes it possible to foresee how the genset will be used and to schedule maintenance.

"Close collaboration between the engineering teams of both companies has made it possible to achieve the desired level of integration, both in mechanical and electric and electronic terms."

Given the climatic conditions of the Port of Constanta, the genset is prepared to work at temperatures as low as -20°C. To make this possible, a heater has been included for the fuel tank, lubricant and coolant, and a system has been installed to prevent condensation and ice formation in the alternator.

Monje added: "HIMOINSA has designed a solution in line with the requirements of PACECO España. We worked in close collaboration to introduce a series of improvements in this new generation of generator sets for our RTGs, making them truly cutting-edge."