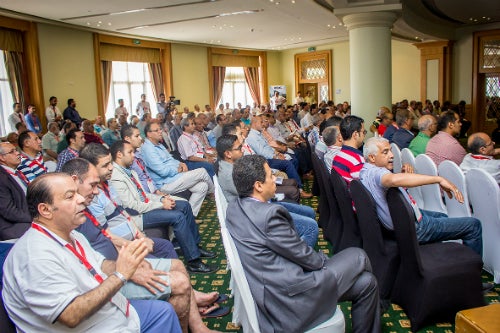 The ‘OTRAC MANEUVER D4YS’ event, that took place in the city of Sharm el-Sheikh, on the Red Sea coast, attracted more than 200 visitors, including representatives of other Egyptian bodies such as the National Organisation for Potable Water or the National Electricity Company. This is not the first time that Egyptian institutions have been interested in HIMOINSA’s power solutions for their market.

The company has already worked for the Ministry of Defence. It recently supplied 12 HDW-525 T5 generator sets that provided energy during work on the second phase of the Suez Canal. It also delivered two HFW-160 T5 models and another two HDW-400 T5 models to the Suez Canal Authority for the port of the new Suez Canal.

One of the water treatment plants run by Veolia Water Technologies will be powered by HTW-1260 T5 and HFW-305 T5 generator sets. Regional Sales Manager Imen Sahbi tells us that "HIMOINSA has been working in the Egyptian market for more than 15 years. That has allowed us to gain the trust of clients here who are looking for quality products".

She added that "our relationship with OTRAC began in 2012 and it has become an important partner for HIMOINSA in Egypt. We have more important projects in this country, mainly in the water treatment sector, with organisms such as the Egyptian National Organisation for Potable Water".

During the event, the company demonstrated the HDW-120 T5 and the HYW-20 T5 generator sets. This latter set is fitted with a Yanmar engine and features an integrated ATS, monitoring and remote control. Its 1000 litre tank allows it to run for up to 14 days without interruption. As is the case with the other models in the Yanmar series, a special kit can be added that extends the maintenance periods to up to 1000 hours, thereby providing an important reduction in running costs.

Telephone companies such as ETISALAT have a very high opinion of the competitive advantages of HIMOINSA’s range of generator sets for the telecommunications industry. Increasing maintenance intervals to 1000 hours and adding larger fuel tanks makes it possible to stagger maintenance operations and on-site visits, considerably reducing travel and other such associated costs. It also
allows the fleet manager to know exactly in what condition the equipment is, in real time.

During the "OTRAC MANEUVER D4YS" the company also showcased the APOLO Start AS4006 lighting tower which is able to withstand temperatures of up to 45ºC. These lighting towers can operate for up to 70 hours non-stop, more than 7 nights without refuelling. Their 4 light bulbs with a 1000 W output offer a total of 384,000 lumens and can light up to 32,000 square metres. The mast is 9 metres high and folds manually and horizontally for optimal and easy transport. The four light bulbs fold vertically, allowing up to 18 units to be stacked in a 40′ container.

View All
Registration is disabled.