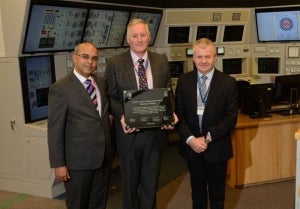 L-3 MAPPS has announced that it participated in the official opening of EDF Energy’s upgraded Heysham 1 plant training simulator on 22 October in Lancashire, UK.

Gorry said: "EDF Energy and L-3 MAPPS have collaborated on numerous simulator renovation projects for 14 years at four of our UK stations, and in every case, we achieved extraordinary success.

"These renovation projects are key to ensuring that our training simulators are best-in-class. The relationship between our two companies is a model for what good customer-supplier relationships and the resulting successes should look like."

"The upgrade to simulate both reactors helps my operators train on all different types of plant operation in a very representative and realistic environment," said Ian Stewart.

"I’d like to thank everyone involved in delivering this project, which has been a positive and significant investment in our training facilities."

Michael Chatlani, from L-3 MAPPS, said: ""This latest Heysham 1 simulator upgrade was rolled out in three phases, each of which was delivered ahead of schedule and on budget.

"The success of this project was largely a result of the open communications between the two project teams and their ability to quickly resolve issues as they arose."

L-3 MAPPS had previously ported the legacy simulator to a Windows platform and replaced the thermal-hydraulic and core neutronics models with L-3’s ANTHEM™ and Comet Plus™.

In the second phase, the simulator’s legacy balance of plant and electrical system models were replaced with higher-fidelity models developed with Orchid Modelling Environment. Phase two was RFT in February.

The third phase involved expanding the legacy simulator to incorporate both Reactor 1 and Reactor 2 control desks, resulting in a fully integrated dual-unit control room simulation environment. The plant models were modified to support both operator desks and related common services and phase three was RFT in October.

The Heysham 1 Power Station started generation in July 1983 and is made up of two advanced gas-cooled reactors, which are unique to the UK, with an electrical output of 1,160MW. The plant and simulator are located on the north-west coast of England.

Image: The opening of the upgraded Heysham 1 simulator. Photo: courtesy of EDF Energy.