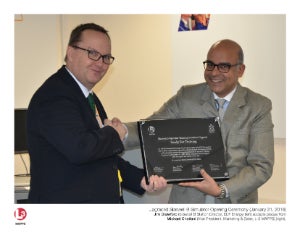 EDF Energy’s Jim Crawford said, "Working with L-3 MAPPS, we have been able to embrace new technology to further enhance our nuclear training program here at Sizewell B."

"We have consistently achieved excellent results at Sizewell B, Hartlepool, Heysham 1 and Hinkley Point B, and are so happy to have had this opportunity to upgrade the Sizewell B simulator," said L-3’s Michael Chatlani. "Sizewell B has always been a special site to L-3 MAPPS as it gave us our first significant entry into the U.K.’s power generation sector and fueled years of further in-country successes."

"L-3 has been especially fortunate to enjoy an outstanding working relationship with our colleagues at Sizewell B over the last 15 years – the phenomenal teamwork between our two companies has resulted in another world-class simulator solution at Sizewell B," he added.

L-3 MAPPS additionally provided six Orchid Touch Interface classroom simulators to be used by the plant operators or other plant personnel to become familiar with the plant control room and its operation.