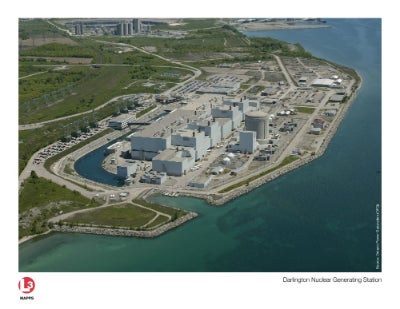 L-3 MAPPS announced today that it has signed a contract with Ontario Power Generation (OPG) to provide replacement trip computers for the second shutdown system (SDS2) and display / test computers for both the first shutdown system (SDS1) and SDS2 on the four generating units at the Darlington Nuclear Generating Station. The design phase is underway and the final production computer equipment for the four generating units is expected to be delivered by the second quarter of 2019.

"We have always capitalised on common technology solutions for our Marine Systems and Power Systems lines of business," said Rangesh Kasturi, president of L-3 MAPPS. "The new project with OPG is an excellent opportunity that allows us to extend the technology and know-how that we use in our naval integrated platform management systems and CANDU* plant control computers and apply them to an adjacent plant process at Darlington."

"For more than four decades, we have worked with OPG to develop advanced custom-engineered solutions for all of its nuclear generating stations," added Michael Chatlani, vice president of marketing & sales for L-3 MAPPS Power Systems and Simulation. "We are grateful to OPG for the confidence they have placed in us to deliver key control and simulation products that have positively contributed to the strong performance of its plants."

In support of the Darlington refurbishment program and OPG’s overall effort to design and develop a replacement for SDS2, L-3 MAPPS will carry out the hardware design, integration and testing of prototype systems, including qualification testing, followed by the delivery of production units for the SDS2 trip computers and the SDS1 and SDS2 display / test computers.

Ontario Power Generation produces about half of Ontario’s electricity in a reliable, safe and environmentally sustainable manner. OPG phased out coal generation in 2014, the single largest climate change initiative in North America. OPG relies on hydro and nuclear power, energy sources that are 99.7 percent free of greenhouse gas and smog-causing emissions. OPG’s Darlington Nuclear Generating Station, located in the Municipality of Clarington in Durham Region, 70 kilometers east of Toronto, is a four-unit station with a net output of 3,512 megawatts that began operating in the early 1990s. The refurbishment of Darlington to extend the operational life of the station has been in planning for more than six years and will be one of the largest infrastructure projects in Canada. Outage execution on the first unit will start in October 2016.