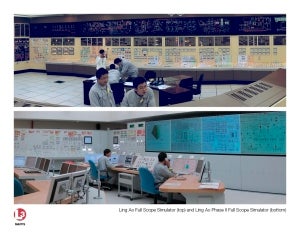 The project will commence immediately and the simulators are all expected to be in service in the first quarter of 2015.

L-3 MAPPS marketing and sales vice-president Michael Chatlani said: "It is an honour to continue supplying advanced simulation software and services to our esteemed customers in the China General Nuclear Power Group.

"Through these updates, we expect to introduce a higher level of consistency between the older Ling Ao and the newer Ling Ao Phase II simulators, while improving the fidelity of the Ling Ao simulator’s reactor model."

The Ling Ao Phase II nuclear plant, owned by the Ling Dong Nuclear Power Company, comprises the first two CPR1000 nuclear generating units that were put into commercial operation. The first unit went into operation in September 2010 and the second in August 2011.

The CPR1000 is a Chinese standard design featuring a 1,080MW three-loop pressurised water reactor (PWR). The Ling Ao Phase II full scope simulator, built by L-3 MAPPS in cooperation with AREVA and Siemens, was put into service in August 2009.

Headquartered in New York City, L-3 employs approximately 48,000 people worldwide and is a prime contractor in aerospace systems and national security solutions. L-3 is also a leading provider of a broad range of communication and electronic systems and products used on military and commercial platforms. The company reported 2013 sales of $12.6 billion.