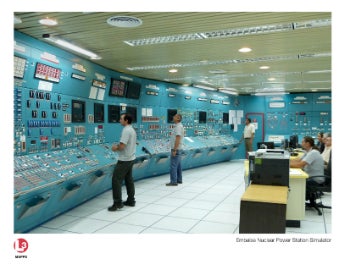 L-3 MAPPS has announced that it has received a contract from Nucleoeléctrica Argentina SA (NA-SA) to upgrade the Embalse full scope simulator. Work will commence immediately and the upgraded simulator is expected to return to service in the third quarter of 2016.

"L-3 MAPPS has enjoyed an excellent relationship with NA-SA since we first took on the development of the Orchid®-based Embalse full scope simulator in 2010," said Michael Chatlani, vice-president of marketing and sales for L-3 MAPPS Power Systems and Simulation. "We are honoured that NA-SA continues to place their trust in us to further develop the simulator, the most modern CANDU* plant simulator in the world."

"NA-SA and L-3 MAPPS put the Embalse full scope simulator into service in 2013 and we have experienced very positive training results since then," said Rubén Semmoloni, Embalse NPP life-extension project director for NA-SA. "The simulator plays a key role in the ongoing training of our operators and will continue to be important as we extend the life of the plant for another 30 years."

Since the full scope simulator was put into service in the first quarter of 2013, the Embalse plant has been through numerous design changes in response to NA-SA’s ongoing plant refurbishment.

The simulator upgrade is intended to reflect these design changes, including updates to the shutdown control systems, introduction of larger emergency diesel generators, improvements to the emergency core cooling system, addition of a new turbine control system, and a power uprate involving several thermal-hydraulic systems to increase the gross capacity of the plant from 648MWe to 683MWe.

The project will also see an update to the Digital Control Computer emulation provided by L-3 MAPPS.

Orchid Multimedia Manager’s advanced features and professional surveillance-grade interface will make it easy to monitor and follow Embalse trainees during simulator training sessions. The audio and video recordings, synchronised with the simulator, will make debriefing sessions much more informative and aid instructors to explain what actions and/or behaviors should be corrected.

The Embalse nuclear power station is one of two operational nuclear power plants in Argentina. It is located on the southern shore of a reservoir on the Rio Tercero, near the city of Embalse in Córdoba Province, 110km south-west of Córdoba City. The single unit at Embalse is a CANDU pressurised heavy water reactor with a net output of 600MWe, which went into commercial operation on 20 January 1984. Embalse also produces the cobalt-60 radioisotope, which is used for medical and industrial applications.

L-3 MAPPS has more than 30 years of experience in pioneering technological advances in the marine automation field and more than 40 years of experience in delivering high-fidelity power plant simulation to leading utilities worldwide. In addition, the company has more than four decades of expertise in supplying plant computer systems for Canadian heavy water reactors. L-3 MAPPS also provides targeted controls and simulation solutions to the space sector.

Headquartered in New York City, L-3 employs approximately 45,000 people worldwide and is a prime contractor in aerospace systems and national security solutions. L-3 is also a leading provider of a broad range of communication and electronic systems and products used on military and commercial platforms. The company reported 2014 sales of $12.1bn.

Except for historical information contained herein, the matters set forth in this news release are forward-looking statements. Statements that are predictive in nature, that depend upon or refer to events or conditions or that include words such as ‘expects’, ‘anticipates’, ‘intends’, ‘plans’, ‘believes’, ‘estimates’, ‘will’, ‘could’ and similar expressions are forward-looking statements.

Orchid is a trademark of L-3 Communications MAPPS Inc. All other products are trademarks of their respective companies.