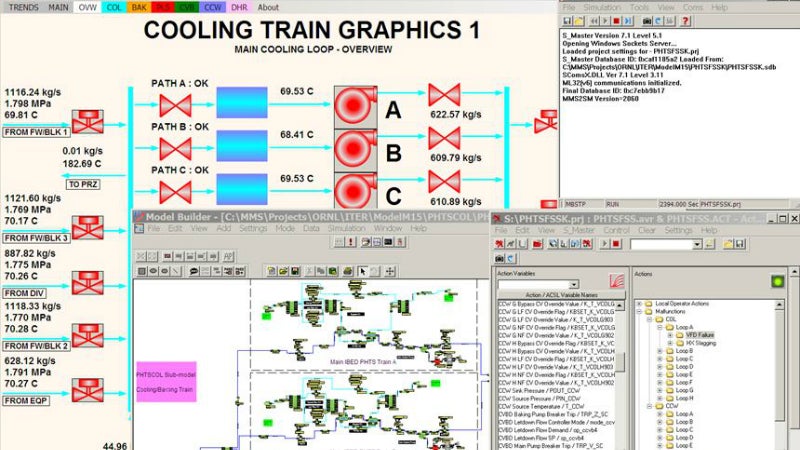 nHance Technologies is announcing the delivery of the TCWS (Tokamak Cooling Water System) simulator for US-ITER. The primary purpose of the MMS™ (Modular Modeling System) based dynamic simulator is to investigate the operating behavior of the TCWS during various transients. A secondary purpose was to provide a part scope simulator that can be used to initiate a discussion on, and potentially prototype, the development of an integrated plant wide simulator.

ITER (International Thermonuclear Experimental Reactor) is an international project to construct the world’s largest magnetic confinement fusion reactor. Deuterium-Tritium fusion reactions produce very high temperature plasma, which is confined by extremely strong magnetic fields in a vacuum. Radiative heat from the plasma is absorbed by the TCWS, which consists of a closed water loop with pumps, heat exchangers, a pressurizer, and connections to numerous client systems. Dynamic Simulation is critical in a first-of-a-kind project like ITER since it can, and has, identified issues in processes that would otherwise be impossible to anticipate before physical implementation. Due to the similarities between this system and cooling systems found in fission reactors, MMS was chosen as a balance between fidelity and speed for this project.

The TCWS simulator consists of three unique components – a detailed process model, a prototype control system, and a prototype HMI (Human Machine Interface). The process model, developed using MMS, includes all of the aforementioned components. Piping layout was matched to the latest version of pre-construction drawings. Parameterization of each component, which ensures proper runtime behavior, was performed using the output of a previous steady state simulation study. Since MMS contains pre-engineered modules, it was well suited to perform the rapid parameterization and benchmarking required by this project.

The preliminary control system, developed using MMS, was designed using a combination of initial operating expectations and existing power plant experience. The resulting control system ensures the operating equipment and parameters are controlled within design limits. Similar to an industrial control system, each control loop has a set number of input/output points, PID controllers, and logical switches. All of these control elements were modeled in MMS, allowing for ease of communication with the process model.

A total of 34 prototype HMI screens were developed using the HMI Kit™ so users can dynamically interact with the simulator as would plant operators. The MMS HMI Kit allowed each screen to be developed quickly and efficiently, in advance of actual HMI screens being available from ITER. The resulting HMI allows engineers to dynamically experiment with the full operation of the TCWS in the simulator. The full design of these screens can be modified in the future as the complete HMI Kit projects were delivered along with the runtime versions.

Testing and analysis of the TCWS simulator was extensive and a final report was delivered along with the final model. Many transients, including accident scenarios, were executed to demonstrate the accuracy of the model by benchmarking to existing data. Transients were initiated through the MMS Action Center, a tool designed to initiate local operator actions, malfunctions, and scenarios in real time simulators.

Lastly, nHance has successfully developed an interface between MMS and the Experimental Physics and Industrial Control System (EPICS). ‘EPICS’ is the communication highway that will be used in the real ITER control system. Since the real controls and HMI will be developed using EPICS, it is now possible to integrate the TCWS simulator with the real control system. This will allow for dynamic simulation based testing of the actual controls before implementation. In addition, if other ITER systems are simulated with EPICS communication in mind, a plant-wide integrated simulator can be created leveraging the investment already being made in individual dynamic simulations.

In 2001, the simulation services business unit of a company now known as Areva (a global company headquartered in France that is widely known as...

As the modern world becomes increasingly 'wired', more critical systems and infrastructure are linked via the internet.