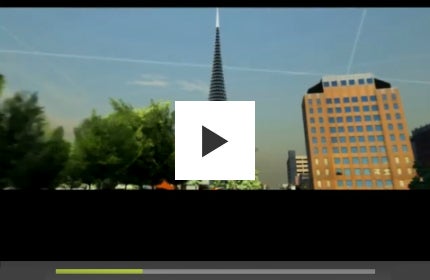 An American architect has taken eco-building design to the next level, by designing what is thought to be the world’s first energy efficient building where the actual structure has been worked specifically to harness energy.

The key feature of the building, which is projected to cost $3m to build, is its integrated design that is based on the idea that wind turbulence occurs around high rise structures. The Turbinomics structure harnesses this wind turbulence using vertical axis four-inch tall carbon-fibre-finned wind turbines, placed horizontally between each floor.

The independent turbines are energised by wind travelling in any direction, with flush doors that can be actuated to maximise efficiency. The building is specifically designed for the Oklahoma, US, skyline which is said to be the second windiest place in America.

The project team, which also includes co-investigator Jamey D. Jacob, from Oklahoma State University, and cost consultant David M Battle, from Pre Construction Services Inc, estimate that the Turbinomics building will offset ten percent of the building’s energy consumption on an average day, with 13mph winds, and 100% on a day with 28mph winds. The average wind speed in Oklahoma is 12.2mph.

Where is the project up to now?

Turbinomics was conceptualised in late 2008 amid the financial crisis of the same year. Seeing an advert for a competition to design a skyscraper in a magazine, Elliott decided to enter, giving himself only 69 days to design what would turn out to be the Turbinomics building.

“The Turbinomics building will offset ten percent of the building’s energy consumption on an average day, with 13mph winds.”

Although he didn’t win, in January 2010, Elliott and his team applied for a patent for the building and were issued one in August 2012.

The team are currently conducting ongoing research to improve the design and development of the turbine geometry, bearing and power generation system.

The team plan to develop the final concept for three separate scenarios: a fully integrated building, retrofit and stand-alone units.

Once all necessary research is completed, the only question will be – who is going to build it?

The world’s largest concentrated solar project has been switched on in Abu Dhabi.

Ten years on from its establishment, the European Marine Energy Centre (EMEC) remains the world’s only wave and tidal test centre to provide marine energy developers with purpose-built, fully accredited, open-sea testing facilities – and it has plans to expand still further.