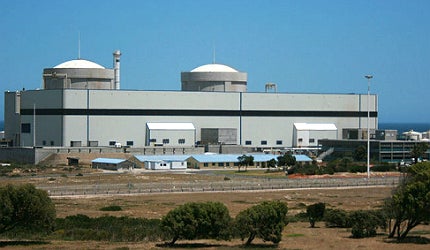 On paper it would seem that South Africa is a perfect market for nuclear development – it has vast uranium reserves and a good investment environment.

But a long delay in the government’s ZAR1 trillion ($125.7bn) nuclear fleet programme has led industry experts to question the readiness of South Africa to commit itself to such a scheme.

The country plans to add 9,600MW of nuclear capacity by 2030 to reduce its dependence on coal, but details of how this will be timed and paid for are being held from public view.

So what are the reasons for these delays? And is building new nuclear the best option for South Africa as it attempts to meet a high base-load demand for electricity over the coming years?

South Africa set out plans to expand its nuclear portfolio in 2010 with the publication of the Integrated Resource Plan (IRP).

The report was based on growth in gross domestic product averaging at 4.5% during the next 20 years, which will require 41,346MW of new capacity.

“The country plans to add 9,600MW of nuclear capacity by 2030 to reduce its dependence on coal.”

IRP 2010 has been approved by the South African Cabinet, but there has been no sign of the country’s biggest procurement programme, which includes six nuclear plants, being rolled out.

South Africa-based independent energy and sustainability consultant Marc Goldstein says the country is running behind on a number of programmes, not just nuclear, and there are a number of reasons for this.

“I think generally there is a lack of regulatory certainty in South Africa so lots of government departments – some pro-nuclear and some anti-nuclear – have interests in particular outcomes.

“In the past, all decision making was done by Eskom. Now you have so many more people involved in the decision process,” adds Goldstein.

Nuclear development in the country has also been held back by previous procurement errors, which may have led the government and Eskom to be more cautious over how it goes about building plants this time around.

In 2008, rival nuclear vendors Areva of France and Toshiba’s Westinghouse, of the US, confirmed that they had submitted bids to Eskom relating to the ‘Nuclear-1’ programme, which would have involved the construction of a two-unit nuclear power plant, with a capacity of up to 3,500MW. In the same year, this programme was cancelled due to lack of funding.

In preparation for the proposed nuclear programme, the government and Eskom have jointly undertaken a self-assessment based on the International Atomic Energy Agency (IAEA)’s methodology of South Africa’s readiness to build more nuclear power stations.

“South Africa set out plans to expand its nuclear portfolio in 2010 with the publication of the Integrated Resource Plan (IRP).”

The Integrated Nuclear Infrastructure Review (INIR) covers 19 issues that a country should address over three phases. They include the government’s commitment to develop nuclear energy, as well as safety, legislation, financing, management and human resource development.

Eskom nuclear-power manager Tony Stott explains: “We’ve got more than 25 years of experience running the Koeberg station and we have a National Nuclear Regulator well established and experienced, but we haven’t actually built a nuclear power station for 30 odd years, so we’ve done a self-assessment and Eskom participated in that.”

The Ministry of Energy has invited the IAEA to conduct a formal review of that process, says Stott, in January or February 2013. Under government orders, however, the INIR is not available for public viewing, a decision condemned by environmental groups.

Greenpeace Africa climate and energy campaigner Ferrial Adam says: “Last year I received documents from a whistleblower who showed me that the country is absolutely not ready to build nuclear power.

“So we want to have a look at this report that they are using as a self-evaluation to see if it has been a fair assessment.”

Goldstein also believes that the report should be seen by the public. “I have absolutely no idea why they are refusing other than that they are trying to hide something that they don’t want known,” he says.

“It’s not wise – I mean, transparency must be a better bet than trying to hide something away. There’s been too much hiding things away in South Africa in the past.”

Greenpeace Africa and the South African History Archives have lodged a formal complaint with the Public Protector and SA Human Rights Commission with regards to the second refusal to publicly release the review.

Adam says Greenpeace will now take the ministry to court. “What they are realising is that we are not going to just sit back and accept that they say, ‘No you can’t get this,'” she says.

Stott admits that the report has not been made publically available but suggests that the government “first wants the IAEA to have a look at it.”

A Department of Energy spokesperson was unavailable for comment.

Perhaps the most important process that has delayed the South African nuclear programme is the completion of the Environmental Impact Assessment (EIA).

“According to Greenpeace Africa, draft assessments have been criticised by residents living in close proximity with these sites.”

But according to Greenpeace Africa, draft assessments have been criticised by residents living in close proximity with these sites.

“Some of the assessments were really bad in terms of environmental impacts, for example on marine life and the dunes. There is one access road that keeps getting washed out by storms. In the assessment [Eskom] said the road was fine and the people living near the road said it is not fine,” says Adam.

“Civil society pushed to get these things looked at so [Eskom] had to do additional studies, which I think they ran out of money for. The EIA was supposed to be out at the end of October and I was just told that it will only be out in February / March next year. They are already experiencing financial woes.”

The safety of nuclear power has been widely debated over the years, particularly since the 2011 Fukushima Daiichi disaster in Japan.

Greenpeace and other environmental groups are concerned that nuclear power stations would not only cost trillions of dollars to build, but create tonnes of lethal high-level radioactive waste and result in a Chernobyl-scale accident once every decade. But Stott insists that Eskom is doing everything it can to ensure the safety of its proposed plants.

“Eskom doesn’t want to buy what we call first-of-a-kind; we’d prefer to buy a particular design that has been processed by a country and is at least under construction. So by the time that we start to operate our plant, it has already had some operational experience elsewhere in the world,” Stott explains.

“Internationally, all the most recent designs are being scrutinised quite carefully by various regulators around the world. The South African regulator is part of some of those processes and is engaging with nuclear regulatory counterparts in other countries to understand the issues behind a particular design and to make sure it’s safe.”

It’s been more than 30 years since South Africa has built a nuclear plant, so the country must climb a steep learning curve before it is to establish a new fleet. But South Africa may not have the skills to execute efficiently on any new build, never mind nuclear, says Goldstein.

“If you look at the delays on our coal fleet and you translate that into what might happen on a nuclear plant you can see that the cost of overruns and delays would be horrendous and that’s a massive risk.”

Another reason why the nuclear programme might not go ahead is because of the number of other available resources that could prove more efficient in providing power to South Africa’s citizens.

“The safety of nuclear power has been widely debated over the years, particularly since the 2011 Fukushima Daiichi disaster in Japan.”

Goldstein explains: “We are sitting on a huge amount of gas which has been discovered in Mozambique and potentially in Namibia as well. So from a technological point of view, when [the government] revises the Integrated Resource Plan, they will investigate those things in much more detail and maybe realise gas is extremely flexible and cheap.”

If the EIA is approved, Eskom gets a license to build a nuclear fleet and there are no further delays to the programme, it could take ten to 15 years to develop the first power station. South Africa will therefore need a resource that fills the gap in the interim period.

“Also, there are Independent Power Producers that are coming into the market slowly but surely and the government has approved the first tranche of renewable energy IPPs. So, yes, it is a tight situation but it is currently being managed.”

Goldstein believes that nuclear power offers a good opportunity for investors as it is reliable and has the potential to meet South Africa’s base-load requirements.

However, the consultant argues that building a nuclear fleet should be approached with caution. “If you build a nuclear or coal plant these days it takes eight to ten years of work before it comes online. You have to commit to that before you actually get the energy, and demand for energy is extremely volatile at the moment. So I would be very wary of building a fleet of nuclear power plants in South Africa at this point,” he says.

Post-Fukushima, the debate on whether thorium is a better nuclear fuel than uranium has reached a new high.

The clock is ticking for governments as they try to find permanent disposal sites for spent fuel while ageing nuclear plants close.