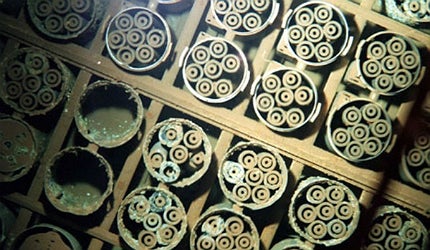 Plans for new nuclear power generation are far from concrete, particularly in western Europe, where politicians and industry experts are chewing over the economic viability of such schemes.

But irrespective of whether nuclear has a future not, there are ageing plants to think about and, as they close, thousands of tons of waste will need to be taken care of.

Storing nuclear waste is a major challenge but could a new breed of reactor solve this?

In the UK, a trajectory of plant closures currently published shows that the first AGR plant will be decommissioned in 2016. Then, by 2020, nuclear capacity could be less than half today's level, at around 4.6GW.

Meanwhile in Germany, all existing plants are set to close by 2022, with no plans to replace them.

France could also witness a nuclear switch off if its new president, Francois Hollande, upholds his pledge to shut 24 of the country's 58 reactors.

With so much capacity projected to come offline, it raises the question of how and where potentially-harmful spent fuel, left over from nuclear reactions, will be permanently disposed of, or if it can even be reused as a fuel source in its own right.

"In the UK, a trajectory of plant closures currently published shows that the first AGR plant will be decommissioned in 2016."

There is currently no permanent site for high level radioactive waste disposal.

Finland and Sweden are the most advanced in developing a repository for deep, geological storage, but for now, much of the waste stuff sits in interim storage facilities above ground.

Over the years, this method has been highly regarded as wholly inadequate, due to risks of ground and water contamination.

Colin Boxall, Professor of Nuclear Engineering and Decommissioning at Lancaster University in the UK, explains: "The current situation where spent fuel is in interim storage at the surface after it has been removed from the reactor is not very satisfactory at all.

"We need to resolve that and get our heads round what we are going to do because leaving it on the surface is not a long-term option and it is not fair to present that to the folk that come after us," adds Boxall.

Boxall believes that the disposal of spent fuel in properly sited geological repositories poses a minimal threat to the environment, a view shared by several governments.

In Finland, containers are to be clad in copper and buried below the water table at the Olkiluoto site, near two existing reactors, beginning in 2020. But, plans for underground nuclear waste disposal have faced fierce opposition in other countries.

In the US, the Yucca Mountain nuclear repository, in Nevada, was to be a deep storage facility for spent fuel and other high level radioactive waste, until the project was cancelled in 2009.

One year later, funding for the nuclear repository was eliminated in President Obama's budget proposal and the Department of Energy moved to suspend licensing for the desert storage site.

US Senator for Nevada Harry Reid said at the time: "This is great news because it protects hundreds of communities through which the waste would have had to travel in order to get to Yucca."

More recently, in May 2012, the UK's Shepway District Council opened up a major debate on whether nuclear waste should be buried at Romney Marsh, a sparsely populated wetland area in the counties of Kent and East Sussex.

A decision has yet to be made on this site, but opponents have slated the project as a dumping ground for highly hazardous waste.

But Boxall believes that these concerns are stemmed from a lack of understanding about nuclear waste disposal: "We have the same problem here in the north-west. People are asked if they want a nuclear waste dump on their doorstep, but what you are actually building is a vault, not a dump, and the minimum is three layers of protection against accidental escape into the environment.

"The UK Nuclear Decommissioning Authority is now trying to encourage communities to understand what the risks are for having a facility of this type on your doorstep and then once communities have said they are comfortable with it and they understand it, a facility can be engineered in such a way that it can deal with the geology in that area," Boxall explains.

The problem with storing spent fuel in deep underground repositories is that it may not be monitorable or retrievable if there is a leak.

"Researchers at Lancaster University are also looking at ways to decontaminate nuclear facilities prior to them being knocked down."

Stephen Tindale, associate fellow at the Centre for European Reform (CER) and climate and energy consultant, explains: "I think in terms of minimising public concern or opposition to say nothing will go wrong is not plausible - it's not going to win public confidence and therefore it is more sensible, in my view, to put it in a shallow repository underground so that people can't fly planes into it. Putting waste underground seems to make sense but deep, geological disposal does not."

But, by designing specific waste forms made from glass and ceramic materials, radioactivity is able to diminish over time.

Fairly unscathed by the disaster in Fukushima, China still has the world's most hard-line nuclear programme.

Furthermore, Boxall and his students are studying the corrosion of uranium dioxide surfaces under conditions typical of geologic repository and have an indication that at long time scales, this substance could self protect.

"No matter how you stash UO2 in a repository, eventually the canister you store it in will leak and we are talking about on a time scale of about 10,000 years, but it will corrode and groundwater will get in," Boxall says.

"Now, what we have identified is that the fuel, as a result of the alfa-radiation field inside it, generates an insoluble layer on its surface that might self protect it against dissolving. We've got a big project in collaboration with Cambridge to drill into that, to see whether or not this is the case."

Researchers at Lancaster University are also looking at ways to decontaminate nuclear facilities prior to them being knocked down.

"With a lot of wastes, the book-keeping around them hasn't been very good and whilst there may be a silo that's full of one waste or another, it's not known what that waste is, and so sensor technologies are needed to go in there to characterise exactly what it is," adds Boxall.

"Boxall believes that the disposal of spent fuel in properly sited geological repositories poses a minimal threat to the environment."

Another option for nuclear waste disposal is to reprocess it before it goes into the ground, a method which involves the chemical separation of fissionable plutonium from irradiated nuclear fuel.

France has been reprocessing its spent reactor fuel since the introduction of nuclear power there and uses some of the reprocessed plutonium to make fuel. Plutonium, however, can be used to make nuclear weapons and, if stolen, poses a threat to international security.

Tindale says: "I don't support the reprocessing and then turning it into plutonium and oxide fuel. I think that is a waste of money and it increases the proliferation risk, but there are some technologies that can burn up existing nuclear waste and the existing plutonium stockpiles and these should be supported by the government."

Such technologies are being implemented at a mixed oxide fuel fabrication facility (MOXFF) in the US, where plutonium left over from the Cold War will be reprocessed as a uranium-plutonium mix, which can't then be used as a bomb.

Boxall says: "On its own, separated plutonium is a bomb risk, but produce a mix-oxide fuel out of it, where you essentially cut it with uranium like cutting talcum powder, you make it unsuitable for bomb making applications but entirely suitable for being used as a fuel for civilian power generation."

Fast breeder reactors could also deal with the plutonium stockpile and nuclear waste, while making the most of uranium as an element.

"When spent fuel comes out of reactors, you have used about five percent of uranium resource and once you burn fuel and stick it in a hole in the ground, you are wasting that uranium, so what you can do is transmute that in a fast breeder to generate plutonium which you can then burn," says Boxall.

Tindale agrees and adds: "The argument that we need to get over the fact that there is not unlimited uranium is not a good argument, because there is enough uranium to fuel nuclear power stations until we are 100% renewable."