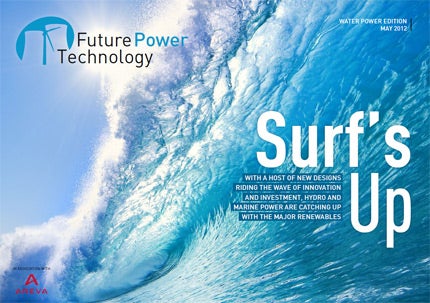 The tide is turning for hydro and marine power as a range of innovative technologies emerges in the market and government schemes support the commercialisation of these new devices. In this issue we investigate which parts of the world have the biggest potential to capitalise on the vast renewable resource, and explore the latest technologies and projects that are driving the marine power sector forwards.

We find out how the testing of Atlantis’ AR1000 tidal turbine is coming along, and ask inventor Alvin Smith why his underwater pump device, the Searaser, could be a potential game-changer for the wave energy sector. We also profile Carnegie Wave Energy’s first commercial demonstration project of its CETO wave energy technology off the coast of Western Australia.

Government support is playing a crucial role in bringing all these budding new technologies to the market. We find out how the UK aims to accelerate commercialisation of marine projects with a programme bringing together authorities, technology developers and investors. As the industry grows, however, so does the legal burden surrounding it. With calls emerging for the UK Crown Estate’s control of the seabed to be devolved, we investigate how the issue of seabed rights could affect developers operating projects in the area.

The ten biggest power companies in 2018

The Race is On
Hydro and marine energy are making a splash around the world, but not all parts of the world have the geographical conditions needed to generate energy from water. Heidi Vella finds out which countries have the biggest potential to capitalise on this vast renewable power source.
Read the full article.

Who Owns the Seabed?
The UK’s Crown Estate, which controls almost all of the Scottish seabed, has come under fire for its management of tidal and wave projects in the area, with politicians calling for seabed rights to be devolved to local communities. Sarah Blackman looks behind this campaign to find out if renewable energy companies will benefit from a government-controlled ocean floor.
Read the full article.

Going Commercial
The UK – already a leader in the marine energy sector – has taken another step forward with the launch of its first marine energy park in the south-west of England. Sarah Blackman takes a look at the programme which aims to accelerate commercialisation of marine power projects by bringing together authorities, technology developers and investors.
Read the full article.

Technology Focus: Making Waves
An innovative ‘marine bicycle pump’ that traps wave energy before pumping it ashore is changing industry conceptions. Heidi Vella talks to former rally racer Alvin Smith about his new invention, the Searaser, which he claims could solve many of the issues that are stalling the tidal and wave power industry.
Read the full article.

Next issue: A fossil-fuelled future?

As the population grows, so does the demand for electricity. In the next issue we find out which role fossil fuels will play in meeting the energy demands of future generations.

Coal-fired generation is expected to increase, but a growing concern about emissions and efficiency is driving the development of ever more advanced technologies. We explore the market for supercritical technology and zoom in on Korea’s plans to build a new generation of ultra-supercritical power plants.

We also take a look at shale gas, which has been called a ‘holy grail’ for energy security due to its huge supplies. We ask the experts how the resource will compete with other generation types and investigate environmental concerns surrounding shale gas extraction.