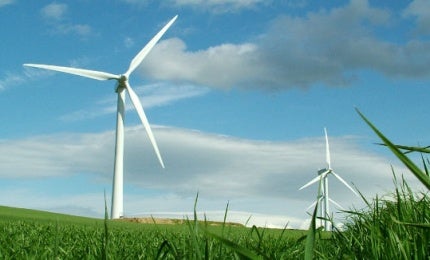 "Onshore wind at the moment is the cheapest and most mature renewable technology. We expect it to be producing just short of half of our renewable energy by 2020." – Ed Davey MP

The UK secretary of state for energy and climate change, speaking at the Policy Exchange last month, echoed what most people already knew; that the UK Government is fully invested, financially and politically, in onshore wind, seeing it as a key weapon in the fight to generate 20% of energy in the EU from renewable sources by 2020 and reduce the UK’s greenhouse gas emissions by 80% by 2050.

But what about the British public? According to the latest public attitudes tracker data released by the government in April, 68% of people now support onshore wind, with only 11% opposed. Apart from pockets of dissent within the Tory party, and a handful of vocal environmental and community protestors, a significant proportion of the populace now appears to accept onshore wind as an integral part of the UK’s 21st-century energy mix.

"The UK may require a further 20,000 turbines in order to meet its 2050 target. This could mean a radical change for the UK’s landscape."

However, in 2012 just 35% of wind turbine applications were approved, compared with 70% in 2008. Given the potential scale of future turbine construction in the UK, the government understands that to convince voters of the long-term benefits of onshore wind – especially those communities in close proximity to wind farms – it needs to sugar the pill.

"There are currently 4,100 wind turbines in the UK, a further 2,900 under construction and 3,000 are working their way through the planning system," said Adrian Newey, head of environment and energy at the Policy Exchange. "How many more might we need to meet our 2050 carbon targets?

"David MacKay’s numbers for the Department of Energy and Climate Change (DECC) estimated that it may be as many as 20,000. This could mean a radical change for the UK’s landscape."

Building a consensus: financial incentives and changes to the planning system

To give local communities a greater stake in the planning process, the government is proposing an overhaul of the guidance system, as well as consultation on a new Community Energy Strategy to be published in Autumn 2013. Unveiled last month, the measures will beef up the consultation process, offer inducements to encourage communities to host wind farms and, crucially, give the public increased powers to prevent turbines from being built.

Subsidies paid to local communities by wind farm developers will increase from the current level of £1,000 per megawatt (MW) of installed capacity per year to £5,000 per MW per year for the lifetime of the wind farm.

"The government understands that to convince voters of the long-term benefits of onshore wind, it needs to sugar the pill."

A medium-sized 20MW wind farm could therefore produce benefits to the local community worth £100,000 a year, which could be used to reduce energy bills, fund energy efficiencies and compensate homeowners whose house prices may be negatively impacted.

However, giving communities a more active role in the decision-making process may result in less turbines being built, meaning the government runs the risk of failing to meet its legally binding renewable energy targets and alienating influential trade associations such as RenewableUK.

"Developing wind farms requires a significant amount of investment to be made upfront," said RenewableUK chief executive Maria McCaffery. "Adding to this cost, by following the government’s advice that we should pay substantially more into community funds for future projects, will unfortunately make some planned wind energy developments uneconomic in England."

The government has pledged to pay onshore wind developers double the current market rate for the electricity they provide until 2019 in the hope that it will become cheaper over time. Until then, the subsidies will be paid for by the UK taxpayer in the form of increases in household bills.

On the other hand, failing to build enough new turbines to meet its 2020 EU target will inevitably increase the UK’s reliance on expensive fossil fuels, which means – you guessed it – more increases in consumer energy bills. Either way, in times of austerity, convincing voters to subsidise wind energy to the tune of £1.2bn in 2013 is a political hard sell.

So will the government’s attempts to incentivise wind energy be enough to appease the sceptics?

Sharing the stage at the recent Policy Exchange event on the UK’s wind energy strategy was Dr Richard Cowell, reader in Environmental Planning at Cardiff University.

He believes that benefits packages paid to local communities rarely work and that the UK Government can learn much from onshore wind projects in Denmark and Germany, where the roll out of wind power has benefitted from the widespread participation of cooperatives and farmers.

"In Denmark, community ownership schemes were so successful that villages actively campaigned for their own turbines."

In Denmark, community ownership schemes were so successful that villages actively campaigned for their own turbines. In contrast, UK projects are typically large, commercial and perceived to benefit distant shareholders at the expense of local communities.

A sounder reason for developers to provide financial benefits, Cowell argues, is to deliver social justice, which is especially important given that much wind-farm development has taken place in rural or coastal areas suffering from economic, social and environmental disadvantage.

"In that context, the role of community benefits might be more about justice, and more about improving the lives and developments of communities living with large infrastructure. To be fair, the government’s language does seem to be moving much more in this direction."

In Wales, for example, the Forestry Commission has been able to extract annual community benefits of £1.8m at the recently approved Pen-y-Cymoedd wind farm, while in the Stirlingshire village of Flintry revenue from ownership of a turbine in a local commercial scheme has been ploughed back into sustainable energy measures for local housing.

No silver bullet: the future of wind energy in the UK

In his opening speech to the Policy Exchange, Ed Davey outlined the three main objectives of UK energy policy – energy security, affordability and emission reduction – and reiterated the coalition government’s commitment to a diverse approach to energy generation to ensure that the nation is less vulnerable to fluctuations in global commodity prices.

He also emphasised that wind energy does not on its own represent a panacea that is guaranteed to solve the many challenges facing the UK’s energy industry.

"There is no silver bullet in energy policy," he said. "Every option has uncertainty. But what is absolutely clear is that we can’t meet our objectives without renewables. The technology is already providing 3% of our electricity mix and we expect that to go up to 14% by the end of the decade."

Despite costly subsidies and compensation paid to developers and local communities affected by wind farms, wind energy remains a relatively cheap option compared with other renewable sources such as nuclear, offshore wind, shale gas extraction, and carbon capture and storage (CCS) – and the most proven method of reducing the UK’s reliance on harmful fossil fuels such as oil, gas and coal.

But that means increased spending on infrastructure, subsidised by the consumer in the shape of rising energy bills, and that cannot happen without the collective will of politicians of all parties, wind energy developers and, crucially, the general public.

To many local communities, wind turbines remain prohibitively expensive, a noisy blight on the landscape and a potential threat to aviation radar systems. Changing their minds may well be the biggest challenge facing a UK Government that has placed onshore wind at the heart of its national renewable energy strategy.

The eyesore effect: are wind farms a blemish on the landscape?
Although wind farms serve the environment, local critics argue that they are an ugly blemish on areas of natural beauty. Chris Lo studies the onshore wind market in the UK, where intensive campaigning focused on the impact of turbines could be holding back the country’s wind power development.