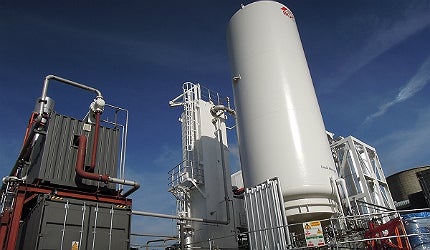 Wind power is one of the cheapest forms of renewable energy but it is also one of the most inconsistent. To overcome the fickle nature of wind and to finally exploit its true potential to replace fossil fuels, utilities all worldwide are trialling different energy storage systems, such as freewheelers, compressed air systems, pumped hydro and cryogenic energy storage (CES).

At the moment, there are about as many ways of storing wind and other renewable energy as there are of generating it, and each has its own pros and cons. But despite all the research, simple utility-scale battery systems are often still the only option to store wind power.

Furthermore, with the installation of bigger onshore and offshore wind farms, use of such battery systems is increasing. With much lower running costs and a smaller environmental impact than fossil-fuelled back-up generators, they are still the storage technology of choice for many utilities.

"Keeping grid frequency and voltage together is the biggest issue of wind generation on an island."

On the small island of Kodiak in Alaska, the electric cooperative Kodiak Electric Association (KEA) opted in April 2012 for a three megawatt commercial utility-scale battery by Xtreme Power (XP) to keep power supply from its nine megawatt wind farm at a constant level. The farm, called the Pillar Mountain Wind Project, is the state’s first utility wind farm and went online in 2009.

Operating as a stand-alone grid, Kodiak depends on a hydro plant (85% of generated power in 2012), a nine megawatt wind farm (eight percent) and diesel generation (7.2%), which balances irregularities. But as it planned to become completely independent from fossil fuels by 2020, another way of balancing power output had to be found. The choice was made in favour of a battery system and the installation is currently underway, along with a second nine megawatt wind farm.

"Batteries are really the best solution for us," explains KEA president Darron Scott. "Keeping grid frequency and voltage together is the biggest issue of wind generation on an island.

"We don’t want to operate fossil units as a back-up, so we will be using the battery system as a bridge when wind slows down," he says. "The total implementation of the project, to get it installed, operating, self-station connection, training and so on will cost us about $4m."

Scott says that KEA had considered flywheels – heavy rotating discs accelerated by an electric motor which acts as a generator on reversal, then slows down the disc and produces electricity. However, energy storage would be significantly less substantial with flywheels: "We had to have a lot more flywheels than planned because they didn’t store energy very long compared to batteries, even though we only needed it for a couple of minutes at once."

Also, compressed air systems that use electricity to compress air stored in underground caverns or aquifers, and then release it to drive turbine-generators to produce electricity when needed, were no real option on the island.

KEA is not alone with its choice for batteries: XP has deployed its Dynamic Power Resources (DPR) battery system to several other renewable energy sites in the US, three of them on the Hawaiian Islands alone, and a total of 22MW country-wide.

One of the company’s biggest projects is a ten megawatt storage system that will back up a 30MW wind farm planned on the island of Oahu. By the end of 2012, the company will have installed an additional 55MW of battery systems in the US.

But why are the simple functionalities of batteries still head and shoulders above alternative high-tech energy storage methods, especially for inconsistent renewable sources such as wind? XP director of product development Jeff Bruce explains that in general, each form of energy storage has its advantages and disadvantages, depending on the application and the site, but that batteries will most definitely play a big role in storing wind power in the future.

"Energy storage is a viable product that is needed as our grid ages and as we bring on new generation sources."

XP’s large-scale, utility-ready battery systems consist of 12V, 1kWh dry cell batteries, called the PowerCells, which are combined with high-performance power electronics and a control system. The company describes its PowerCell battery chemistry as a ‘chemical capacitor’ that can beat lithium-ion batteries in terms of energy storage, efficiency, lifecycle and cost.

The complete system can operate within existing infrastructure or become part of planned infrastructure. The idea is that when variable solar and wind power dies down, or fluctuates too much, the battery system can rapidly store or release the energy when needed to smooth out the grid.

"What our system does is absorb the power at different rates when it’s coming off the turbines. We absorb it, we charge the batteries and turn it right around and put out a more consistent, stable power to the grid so it doesn’t cause faults and issues with the end-user," says Bruce.

"One of the key benefits to wind turbine owners is that they can utilise more of the power output of that wind turbine. With the energy storage system battery, generators are able to put out as much as they can. Operators will see more benefit and more revenue because they are able to use wind turbines at max capacity versus being curtailed because of the variation," he explains.

"Each form of energy storage has its advantages and disadvantages, depending on the application and the site."

One of the most promising new storage technologies to emerge in recent years apart from battery systems has been developed by engineers at UK-based Highview Power Storage. By building the world’s first prototype of a liquid air energy storage system in 2010, it not only won The Engineer Technology and Innovation Award in December 2011, but also developed a potential solution to several of the sector’s issues.

In April 2010, the company opened a pilot facility near Slough, UK, in cooperation with Scottish and Southern Energy and industrial gas company BOC. It seizes electricity from a nearby biomass plant and uses it to liquefy air by cooling it to -200°C. The energy can then be released and supplied back to the grid by evaporating the cryogenic fluid. The resulting gas is used to operate turbine generators.

Ambient or waste heat can be used in the evaporation process and the cold energy from the exhaust stored and reused to liquefy more air, making the whole system more efficient. The full system returns about 50% of the energy that is put in, which increases to 70% if it uses waste heat from another source, such as a power station. This is similar to the efficiency of the much less energy-dense compressed-air storage plants and compares to 70-85% for batteries and 65-75% for pumped hydro.

The plant is one of the only a few technologies which can be delivered today at the 50-100MW scale with hundreds of MW/hr of energy stored, claims Highview. At the beginning of July 2012, Highview signed its first commercial contracts with Basil Read Energy (BRE) in South Africa and Messer Group in Germany.

BRE director Ian Curry said: "The unique power of this solution is that the air is free and there is an infinite supply of it, so using air in liquid form as the energy storage vector is an extraordinarily attractive solution. It means the plants can be located anywhere rather than being dependent on a specific type of geography or location of a specific resource, such as water".

He explains that in order to cater to the growing need for energy, operators need to stabilise their output with whatever technology is best for the site, the grid and the consumers.

"Our main focus at Xtreme Power is to promote energy storage, to show the benefit and to demonstrate that it not only helps stabilise but that there is also a revenue-stream for operators to realise," he says.

"We can all benefit from that: the end consumer has a much more stable source and we can diversify into other energy generation besides just the fossil fuels. It allows more energy coming from wind and solar and that’s our key there."

"Energy storage is a viable product that is needed as our grid ages and as we bring on new generation sources," he concludes. Put simply, batteries are more likely than ever to play a big role in reaching the goal for cleaner and more viable renewable energy sources – along with some of the other new and old energy storage technologies.