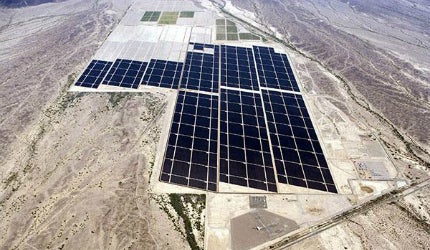 Agua Caliente Solar farm is a 290MW photovoltaic (PV) power project located in the east Yuma County of Arizona, US. It is owned by NRG Energy and MidAmerican Energy Holdings and is currently the world’s biggest photovoltaic solar power plant.

The $1.8bn solar project was originally initiated by NextLight Renewable Power, which was acquired by First Solar in 12 July 2010. In August 2011, NRG Energy acquired the project from First Solar. MidAmerican purchased a 49% stake in the project in January 2012.

Agua Caliente was named ‘Project of the Year’ by Excellence in Renewable Energy awards in February 2012.

The Agua Caliente solar farm is built on a previously distributed agricultural land, 65 miles on the White Wing Ranch. It was selected after an extensive research on the availability of solar resources, proximity of existing Hassayampa-North Gila 500kV transmission line adjacent to the site and current land uses. The project needed minimal new transmission infrastructure because of its strategic location.

The PV modules generate electricity without releasing any emissions, waste or water, with minimal noise and cause a low visual impact; they will also have the smallest carbon footprint compared to conventional PV technologies. The panels will be recycled after their useful lifespan.

The project employs several power conversion station (PCS) vaults and 400 units of SMA’s Sunny Central inverter. Each PCS contains a pair of SMA inverters. The inverter is referred to as fault- ride-through technology, which employs dynamic voltage regulations technology. The new inverter technology supports and improves the reliability of the electric power system. Agua Calinte is the first solar power plant in the US to use this technology.

A new regional switchyard is also constructed at the site.

The Agua Caliente solar farm is developed on 2,400 acres of farmland near the communities of Dateland and Hyder.

“In January 2012, the project started commercial operations by generating 30MW of electricity.”

In January 2012, the project started commercial operations by generating 30MW of electricity to the grid. It exceeded 100MW of grid-connected power by spring 2012 and 200MW by the summer.

First Solar was the engineering, procurement and construction (EPC) contractor for the solar project. Under the EPC contract, the company provided thin-film PV modules, as well as looks after the operation and maintenance of the plant.

The US Department of Energy (DOE) finalised a $967m loan guarantee to support the construction of the solar project, in August 2011.