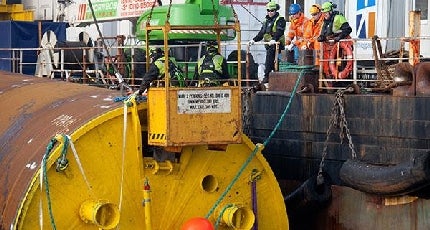 It generates enough clean energy to power some 400,000 households. Its power capacity is equivalent to around 4% of the total Danish power consumption.

The wind farm was officially inaugurated in September 2013. The project ensures the Danish Government to achieve the target of 30% renewable energy share by 2020.

In September 2011, the Nordic Investment Bank (NIB) and DONG Energy signed a €240m loan agreement for the project.

The wind farm site is situated between Djursland and the island of Anholt in water depths of 15m to 19m. The site covers an area of 144km2, with a length of 20km and width between 4km and 12km.

The actual area occupied by the wind farm’s infrastructure is 88km2. This area includes the wind turbines and array cables. The shortest distance to the shore is 15km; and distance between the site and the island of Anholt is 20km.

"The Nordic Investment Bank (NIB) and DONG Energy signed a €240m loan agreement for the project."

In February 2008, the Danish Government and parliament reached a consensus on the country’s energy policy for the period of 2008-2011.

This policy allowed the parties to make a decision on the construction of a new offshore wind farm between the island of Anholt and Djursland as a part of ‘Offshore wind farm action plan 2008’.

The tenders for the construction of Anholt Offshore Wind Farm were invited by the Danish Ministry of Climate and Energy in April 2009.

DONG Energy was awarded the license to construct and operate the wind farm, in July 2010. Under the license, DONG Energy will use the generated wind power for 25 years.

The Anholt Offshore Wind Farm is installed with 111 wind turbines of SWP 3.6-120 make from Siemens. Each wind turbine has an installed capacity of 3.6MW. The wind turbines are placed at a distance of about 500m to 800m based on the layout design.

The height of each wind turbine is 141.6m, with a rotor diameter of 120m. Each unit weighs 450t. The cut-in and cut-out wind speeds of the turbine are 4m/s and 25m/s respectively.

The wind farm was built using a range of special-purpose vessels specialised in offshore installation. Construction began in January 2012 and was completed in September 2013. The work involved the installation of monopile foundations with a diameter of 5m.

"Under the license, DONG Energy will use the generated wind power for 25 years."

A large hydraulic hammer fitted on the installation vessel was used to drive the monopile 18m to 36m into the seabed, and then a transition piece was mounted on the monopile. This was painted yellow to ensure safe navigation.

The wind turbine installation was carried out by special-purpose jack-up vessels. The work involved the lift-up of tower parts, nacelle and blades. The final stage of construction included the installation of buried submarine cables, AC submarine cable and substation. The Port of Grenaa was opted to set up a logistics base for complementing the construction phase and maintenance operations.

Navigation lights were placed during the construction and operation for air and marine traffic. The installation was complied with the regulations of the Danish Civil Aviation Administration and the Danish Maritime Safety Administration.

The Danish transmission system operator Energinet.dk was selected to set up an offshore substation, the export cable and the connection to the main high-voltage power grid on shore. Each wind turbines is connected to the offshore substation by cables. A 25km-long export cable was laid to connect the wind farm to the national grid at Trige.

Maintenance of the Danish wind farm

The Anholt wind farm employs around 50 people to monitor, service and maintain it from the base in the port of Grenaa.

The wind facility is also monitored by the staff from the shore and by the built-in monitoring system installed on wind turbines. The system checks for errors and shuts down any wind turbine it finds to have a critical error.

The central DCS (distributed control system) collects the data about wind speed, wind direction and wave height, along with the status and production of each wind turbine.

It is linked with the internal monitoring system of each turbine. The turbines will be inspected once in a year, with one to three serviced in each planned visit.

The Amager Bakke combined heat and power (CHP) complex is being built in the outskirts of the Danish capital Copenhagen.