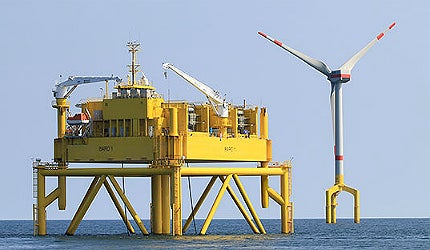 BARD Offshore I is a 400MW offshore wind farm, its construction began in March 2010. The project is located around 100km north-west of Borkum Island in the North Sea, covering an area of about 60 square kilometres.

It is the third largest offshore wind farm in the world as of 2013.

The project received €53.1m ($65m) grant under the European Energy Programme for Recovery (EEPR) from the European Commission.

The offshore wind farm is installed with a total of 80 Bard 5.0 wind turbines, capable of serving the energy needs of up to 400,000 households.

Details and installation of turbines at the German wind farm

The turbines have a rated capacity of five megawatts each and are installed at water depths ranging from 40m to 44m.

The foundation of each turbine weighs 239t and is a tri-pile structure consisting of three pylons and one transition piece. Each pylon weighs 72t. The ancillary structures weigh 23t.

The piles are 90m high and are laid 40m underwater, with a further 30m inserted into the seabed. The hub height of the turbines above water is about 90m. The rotor blades measure 122m in diameter.

The turbines were installed using several jack-up barges, such as the Barges Windlift, JB 115, JB 117 and Thor.

The crews at the project site were transported and provided offshore access by Amplemann system, which is a self-stabilising platform attached to the VOS Sympathy vessel.

The turbine installation was completed one month ahead of the planned timeline.

Grid connection for BARD Offshore I

The first turbine was grid connected in December 2010. Power generated from BARD Offshore I will be first transmitted to the Borwin I (Alpha) Offshore platform and then to Diele substation onshore, 75km from the coast.

The AC transformer at the Borwin I (Alpha) Offshore platform will convert the power into high-voltage direct current (HVDC) before transmitting it to the German power grid through a 200km cable line.

The power is then fed to the European grid. The substation further feeds it to the 380kV German national grid.

“The hub height of the turbines above water is about 90m. The rotor blades measure 122m in diameter.”

The transformer station used for BARD Offshore I was built by Bard Group and Netherlands-based marine services provider Jack-Up Barge. Jack-Up Barge also provided the JB 115 and JB 117 jack-up barges for the installation of the turbines and rotors. Thor, the other jack-up barge, was provided by Hochtief Solution.

The pylons and ancillary structures required for installing the tripile foundations were provided by BLRT Grupp/Marketex. SGL Rotec supplied the rotor blades for the wind farm under a five year contract.

The foundation structures for the project were produced by Cuxhaven Steel Construction in 2008. ABB provided the design, supply, installation and engineering services for the offshore converter. The sea and land cables were also installed by ABB.

The transition pipes were built and supplied by EEW Special Pipe Constructions.

Amrumbank West is a 288MW offshore wind farm being developed in the North Sea, Germany.