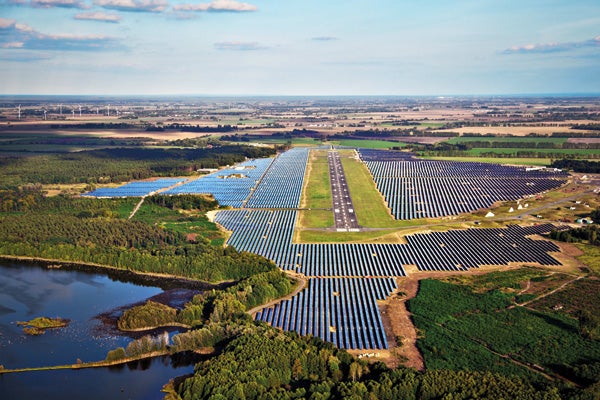 With an installed capacity of 145MW, the plant generates approximately 19.69 million kWh/year of renewable electricity that is sufficient for 48,000 homes. It is expected to offset approximately 12,700t of carbon-dioxide emissions per year.

Danish Airport Development and Solarhybrid developed the photovoltaic solar project. BaySolar Projekt was the engineering, procurement and construction (EPC) contractor for the project.

The Neuhardenberg solar power plant is set-up in an area of 35ha of the 240ha airfield site. The plant is installed with approximately 60,000 photovoltaic panels. The Talesun TP660P type modules have a maximum power of 235W and 240W. The voltage at maximum power of these modules ranges between 29.5V and 29.7V with a module efficiency of 14.5% and 14.8%.

The plant includes skycontrol PV power plant controller, which is an advanced system that controls the adjustment options and provides for the integration of inverters. It helps in transferring the regenerative power into the grid in addition to enhancing the grid stability.

"It is currently one of the largest solar power plants in the world."

The Powador XP550-HV TL central inverter is a 500kVA inverter which comes with a transformer-less technology. It has a capacity of up to 600kW. The inverters are arranged in 12 stations with an output of 1.65MVA.

The frame technology used at the Neuhardenberg solar power plant is Sigma II mounting system. It includes micro piles instead of large beam-type piles, which helps to cut the expenditure on hydraulic rams and transportation, and provides easier material handling.

A cascaded closed loop control system was implemented for transmission of power to the grid connection point. The control system is made up of a primary controller and four subordinated controllers at 110 and 20 levels. Each controller has a separate closed-loop control path with actual value feedback system.

The entire power generated at Neuhardenberg is transmitted to EON edis network. The plant was connected to the grid in March 2013.

The construction works at Neuhardenberg solar project began in September 2012. The plant was constructed in lieu with the EEG compliance guidelines within five months. It created about 1,700 jobs during the construction phase.

Major works included the installation of module tables, modules, inverters, transformer stations, and a substation. The substation was constructed at Metzdorf, which is located within 7km from the plant.

Financing of the Neuhardenberg PV plant

Financing for the 145MW solar plant was made through a $365m loan facility. Enerparc, Ecos-energy, BaySolar and MEP Asset Management provided equity finance for the power plant, while SUISSE BANK provided the required guarantees.

Graess was awarded the contract for providing the installation and cabling works. The works also included pile installations, excavations, cabling delivery and assembly, and the fencing system.

"It created about 1,700 jobs during the construction phase."