The Templin solar power project was constructed on a former military airfield at Brandenburg, Germany.
The Templin photovoltaic solar power plant was inaugurated in April 2013.
With over 1.5 million PV panels, the Templin plant generates 120 million kWh of energy per year. 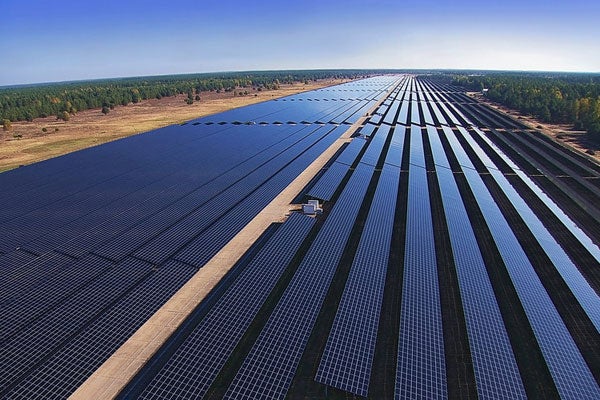 The $269m solar PV plant is owned by Commerz Real and developed by Belectric. It was built as part of the Energy Strategy 2030, drafted by the Brandenburg state for developing the energy sector.

The plant generates 120 million kWh of power annually, which is sufficient to supply for 36,000 households and is expected to offset approximately 90,000t of greenhouse gas emissions per year.

“Germany has set a target of producing 35% of electricity from renewable sources by 2020.”

The plant is equipped with 3MW block technology of Belectric. The block system is specifically designed for maintaining the optimisation and integration of the grid. This helps in achieving higher energy production at a minimal cost.

The intelligent power plant technology comprises of dynamic controls for regulating the voltage and minimising the grid fluctuations.

The special electronics system is used to counteract the generated reactive power and improves the grid stability. It helps in adding more energy to the grids without any further grid expansions. A phase shifter is installed for balancing the reactive power.

The grid management function provides leading or lagging power to the plant and compensates the leading reactive power generated. This helps in reducing the need for additional compensation system. The inverters are also specifically designed to work efficiently in cold temperatures.

The Templin solar power plant was connected to the energy grid in Templin, Brandenburg in April 2013. The city of Berlin will be powered with the electricity generated by the plant.

“The city of Berlin will be powered with the electricity generated by the plant.”

The engineering, procurement and construction (EPC) contract for the Templin solar power project was awarded to BELECTRIC Solarkraftwerke. The scope of the contract covered the installation of solar panels, plant commissioning, grid connection and power generation.

First Solar supplied the photovoltaic modules for the plant.

The German solar power market has emerged as the leading solar photovoltaic installer with a solar capacity of 34.186GW by June 2013. The solar PV installations were about 7.6GW in 2012 and the total power generated in 2011 was 18 billion kWh.

Germany has set a target of producing 35% of electricity from renewable sources by 2020.

Germany installed a record number of new solar power plants in 2012, but interest in the renewable energy source fizzled out in the fourth quarter as subsidies were slashed to curb costs to customers, new data shows.