Government of the Republic of Bulgaria

Expand
The Bulgarian Government decided to restart the Belene Nuclear Power project in 2002, but it was not without controversy.
The Belene plant included two modern units of VVER type reactors, capacity rated at 1,000MW each.
NEK EAD and RWE Power were developing the Belene plant under a joint venture agreement before RWE pulled out. 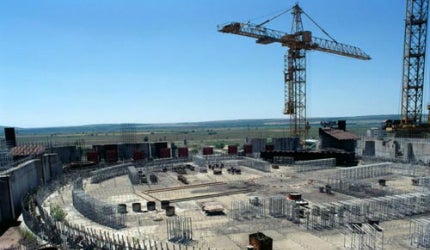 NEK EAD and RWE Power entered into the joint venture agreement for building the plant in December 2008. The agreement included financing, construction, ownership and operation of the power plant. NEK EAD holds a 51% stake in the joint venture while RWE holds the remaining stake.

In 2009, RWE which was supposed to provide €2bn in exchange for a 49% stake pulled out of the project, Construction was frozen in 2010 due to uncertain return on investment and lack of funding. The Bulgarian Government announced plans to put construction acitivites on hold.

Atomstroyexport offered €4bn and €2bn in spring 2009 and spring 2010 respectively, but the offers were rejected by the governments of Stanishev and Borisov. It was also announced that construction will not continue unless it is funded by an investor from Western Europe to reduce Bulgaria’s dependence on Russia.

The project was finally abandoned in March 2012 after it failed to attract any investors. The estimated €10bn cost of the project was too high to be funded by Bulgaria alone.

The first reactor, which has been completed, is planned to be transferred and installed at Bulgaria’s Kozloduy nuclear power plant. A new natural gas-based thermopower plant is expected to be developed at the site of the Balene plant.

Details of the Belene nuclear facility

WorleyParsons was the owner’s engineer for the project. The scope of work of Worley Parsons included the development of EPC vendor solicitation and evaluation criteria, assistance in project financing, vendors’ tender document assessment and development of draft contract for the EPC services, training for NEK, evaluation and verification of vendor designs and technical documentation.

The plant consisted of two modern units of VVER type reactors, capacity rated at 1,000MW each. Unit 1 of the Belene plant was expected to be commercial in 2014 and unit 2 in 2015.

The Russian state-run civilian nuclear power corporation Rosatam was also expected to purchase a stake in the project, it was, however, not declared officially. NEK EAD signed a contract with BNP Paribas to launch the process for arrangement and structure of financing required for the Belene nuclear power project in June 2008. In early 2008, the cost was estimated to be approximately Є4bn. Later, the cost was revised upwards to about Є10bn, which resulted in financing issues.

The technical project is yet to be reviewed and approved by the Nuclear Regulatory Authority.

Old structures that cannot be integrated into the new plant were removed. It was estimated that 150,922m³ of soil was required to be excavated, and 8,780t of metal structures and 150,298m³ of concrete structures (including those of RCC) to be dismantled by fragmentation. Diamond and hydraulic tools were employed during the process. By the end of December 2008, 23,755m³ of excavations were completed and 5,122t of metal had been dismantled.

"A number of environmental organisations expressed opposition and concerns in relation to the plant."

The contract for building each of the 1,000MW reactors and delivering the essential equipment for the power plant was awarded to AtomstroyExport, a subsidiary of Rosatom, in October 2006.

The EPC contract for design, construction and commissioning of units 1 and 2 of the plant was signed between NEK EAD and Atomstroyexport in January 2008.

The primary subcontractors of AtomstroyExport included a consortium composed of AREVA NP, France and Siemens, Germany. The contract is valued at approximately Є3,997.26m.

History of the Bulgarian nuclear development

The government of the Republic of Bulgaria decided to restart the Belene project in 2002. Based on an environmental impact assessment (EIA) prepared by NEK EAD, the approval for construction of a 2,000MW nuclear facility over the project site was given in 2004. The consent for the plant construction was given by CoM in 2005, verified under the Act on the safe use of nuclear energy.

NEK EAD’s board decided to award the contract for design, procurement and commissioning of the Belene nuclear units 1 and 2 in May 2005. The tender was submitted by AtomstroyExport Russia and the Consortium Skoda Alliance.

The Bulgarian Nuclear Regulatory Agency issued permits for design of the two units in May–June 2007. Building structures, main and auxiliary structures, equipment available and needed for commissioning and operations of the unit along with handling, storage, and usage and monitoring of nuclear fuel were defined under the plant’s design.

The design obtained EUR certification, catering to its compliance to all European requirements in 2007.

The AES 92 reactor variant planned to be installed at the Belene nuclear power plant was a new-generation water-water energetic reactor ( VVER or WWER) licensed by authorities, principally in Russia.

The plant had a pressurised water reactor design with four first-stage coolant circulation loops per reactor. The AES 92 reactor facility has an estimated life of 60 years. The net efficiency of the plant is 35% and its availability is 90%.

The AES-92 design was chosen for the reactor because of its unique combination of active and passive safety and security systems.

The Minister of Energy and Energy Resources of the Republic of Bulgaria was assigned to perform the environmental assessment of the Belene nuclear power plant in 2002. NEK EAD produced an EIA report along with a feasibility study for the plant construction. The EIA report did not include the complete information on seismic conditions. A number of environmental organisations expressed opposition and concerns in relation to the plant.

The completion of the Belene nuclear power plant may have supported Bulgaria in complying with the Kyoto Protocol and strict Election Commission release norms.