The first 22MW of the 250MW California Valley Solar Ranch was delivered in October 2012.
The CVSR project began commercial operations in October 2013.
A total of 749,088 SunPower solar panels were installed at the project site. Image courtesy of SunPower Corporation. 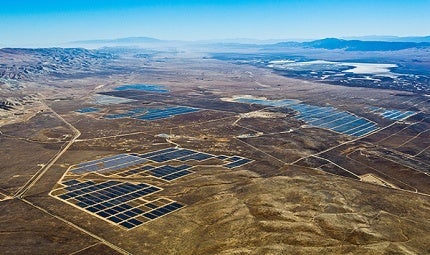 NRG Energy (NRG) became the sole owner of the plant after NRG Solar, a wholly owned subsidiary of NRG, acquired the project from SunPower in September 2011. Total investment on the project is estimated to be approximately $1.6bn.

The power generated by the project will be enough to meet the annual electricity needs of as many as 100,000 homes on average.

The project is spread over approximately 4,700 acres (1,902ha) of former grazing land in the Carrizo Plain. Solar arrays, substation and facility buildings cover just 30% of the project site, while the remaining land is preserved and used for the conservation of species in the area.

The site also includes an abandoned gypsum mine, which was cleaned and restored for operations.

The location was selected because of its flat topography, abundant solar resources and proximity to existing transmission lines.

"The location was selected because of its flat topography, abundant solar resources and proximity to existing transmission lines."

The Oasis power plant uses high-density 1.5MW solar power blocks, which are fast, cost-effective and significantly reduce land usage. A total of 749,088 solar panels are installed at the plant.

Power supply from the CVSR facility

The power from the solar facility is purchased by Pacific Gas & Electric (PG&E) under a 25-year power purchase agreement. The generated electricity is transferred to the Morro Bay-Midway transmission line through a tie-line and switchyard.

Contractors and financiers involved with the CVSR project

"SunPower solar panels are designed for safe recycling at the end of their useful life, which is more than 25 years."

NRG and SunPower are responsible for the operations and maintenance of the plant for the first two years, after which NRG will solely take over these activities.

The project received a $1.23bn loan guarantee from the US Department of Energy’s (DOE) Loan Programs Office in September 2011.

Environmental and economic benefits of the CVSR project

The CVSR facility is a source of clean and quiet renewable energy. It requires minimal water for periodic cleanups and includes a water recycling plant. It will reduce harmful gaseous emissions by approximately 336,000t annually.

SunPower solar panels are designed for safe recycling at the end of their useful life, which is more than 25 years. The panels do not contain any hazardous material, galvanised metal or lead solder.

The 12,000 acre area in and around the Carrizo Plain is protected, restored and managed to protect local species. The solar project also promotes vegetation.

CVSR will contribute approximately $315m for economic development of the region. It created over 700 jobs during the course of the construction.