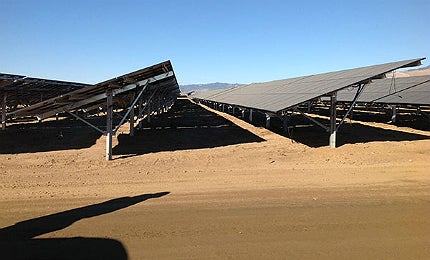 In January 2013, GE Energy Financial Services, along with MetLife, Union Bank and Citi, acquired a majority stake in the project.

The solar photovoltaic (PV) power project was built in two phases. Construction started in May 2012. The 60MW first phase went online in December 2012. The 83MW second phase was dedicated on 27 September 2013.

The Catalina solar project is currently the eighth biggest photovoltaic plant in the world and generates electricity for 35,000 homes while offsetting emissions of around 74,000t of CO2.

In June 2012, EDF Renewable and San Diego Gas & Electric (SDG&E), a subsidiary of Sempra Energy, entered into a 25-year power purchase agreement (PPA), according to which the power generated from the Catalina Solar Project is being sold to SDG&E.

Catalina Solar Project was conceived as part of a solar-wind hybrid project proposed by EDF Renewable Energy. The hybrid project generates power from both wind and solar sources in the Tehachapi-Mojave region of Kern County and feed the grid of Southern California Edison (SCE) using shared transmission infrastructure.

The engineering, procurement and construction (EPC) contract of the Catalina Solar Project was awarded in April 2012.

The financing for the project was secured in January 2013. The solar project became operational in September 2013.

The Catalina Solar Project is developed on 1,100 acres (445ha) of privately owned land, south-west of the Tehachapi and Piute mountains in the Mojave Desert of California.

The project site is located near EDF Renewable Energy’s other projects, such as the 60MW Oasis Wind Project and the 140MW Pacific Wind Project. It also has good proximity to the transmission network.

CdTe is an established thin film photovoltaic technology offering higher cost-efficiency, compared to crystalline silicon PV. The technology involves placing of semiconductor material composed of cadmium and tellurium in thin layer on to the surface of glass sheet.

CIGS in contrast involves a tetrahedrally bonded semiconductor composed of copper, indium, gallium and selenium. The polycrystalline semiconductor compound is placed onto molybdenum-coated glass sheets. A thin layer of transparent conductor, such as zinc oxide (ZnO) or cadmium sulphide (CdS), is deposited on top of it.

The CIGS semiconductor compound absorbs light, by which free electrons and holes are created. The electrons diffuse in the CIGS grains and create an electric field at the junction from where they are driven into the transparent conducting oxide layer. A voltage is thereby developed between the ZnO/CdS electrode and the molybdenum base electrode.

Catalina Solar Project is all set to explore this emerging technology. With CIGS PV panels comprising 82MW of its installed capacity, the solar project is considered to be largest ever CIGS thin film installation.

Contractors and suppliers for the Catalina Solar Project

Bechtel was awarded with the EPC contract of the Catalina Solar Project. It was also responsible for building the transmission line. First Solar was awarded a contract to supply 61MW of thin film CdTe PV panels for the project.

Solar Frontier, a subsidiary of Showa Shell Sekiyu based in Japan, supplied 82MW of CIGS panels for the project.

The solar panels were manufactured in its production facilities in Miyazaki and were delivered in 623 shipping containers. SMA is the supplier of the power conversion system, including the central inverters and transformers.