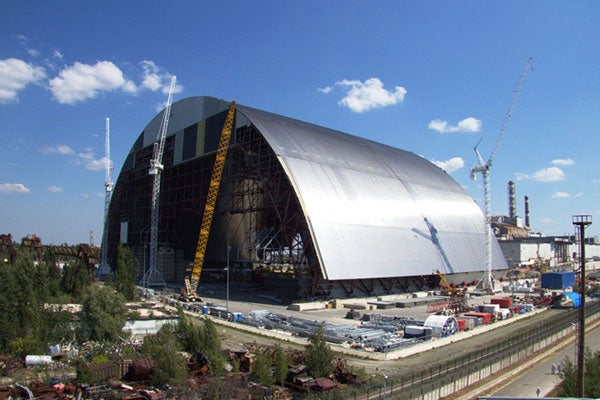 The Chernobyl New Safe Confinement (NSC) is an arch-shaped structural shelter being built to confine the radioactive material at Chernobyl Unit Four, protect the existing temporary object shelter (sarcophagus) from weather damage, and enable the decommissioning of Unit Four.

The project forms the main component of the €2.1bn ($2.3bn approximately) Shelter Implementation Plan (SIP) integrating more than 300 sub-projects that are launched to address safety and decommissioning works at Chernobyl, which experienced the world’s worst nuclear power plant disaster in April 1986. The overall investment in the NSC project is estimated to be €1.5bn ($1.66bn approximately).

The NSC concept was approved in 2004, construction was initiated in late 2010 and is scheduled for completion in late 2017. The project is being overseen by the Chernobyl Nuclear Power Plant (ChNPP), a state-owned enterprise responsible for decommissioning the Chernobyl plant.

On 26 April, 1986, the Chernobyl nuclear power plant’s number four reactor exploded, sending a radioactive cloud across much of Europe.

The metal frames are externally clad with three layers of sandwich panels and each component of the internal frame is covered in polycarbonate to make them resistant to radioactive particles.

The NSC is designed to withstand temperatures ranging between -43°C and +45°C, a class three (one million year) tornado, and a six Medvedev-Sponheuer-Karnik (MSK-64)-scale earthquake.

The facility will be equipped with two automated camera-equipped cranes with a lifting capacity of 50t each, as well as other associated equipment to enable the dismantling of Unit Four.

Construction of the New Safe Confinement

The metal structural components were prefabricated in Italy and are being assembled at the project site in a specially designed area located west of the existing sarcophagus. The foundation of the assembly area is covered with a concrete slab to minimise radiation exposure for workers.

The first half of the arch was lifted to its complete height in April 2014 followed by the other half in October 2014. The two halves were successfully connected in August 2015 and are being tightened using more than 1,000 bolts.

Sliding the entire NSC over the existing sarcophagus is scheduled for early 2017. An auxiliary building will be constructed at the foot of the sarcophagus, which will serve as the control centre.

Accommodation facilities are provided for more than 1,000 workers at Chernobyl in decontaminated and renovated apartments. The project design offices are based in Kiev and the administrative and functional offices for NOVARKA JV are located in Slavutich.

“The NSC is designed to withstand temperatures ranging between -43°C and +45°C, a class three (one million year) tornado, and a six Medvedev-Sponheuer-Karnik (MSK-64)-scale earthquake.”

The design and construction contractor for the project is NOVARKA, a 50:50 joint venture (JV) between VINCI Construction Grands Projets and Bouygues Travaux Publics. The JV was awarded the contract in September 2007 and is being assisted by local partners including UkrEnergobud, UkrEnergoMontazh, Fundament, UkrNiiProyektStalKonstruktsiya, TcentroStalKonstruktsiya, and UkrStalKonstruktsiya.

The conceptual design for the NSC was developed by a consortium of Bechtel, Battelle Memorial Institute and Electricité, and EDF. Other contractors included the KSK Consortium (Scientific and Research Institute for Civil Structures (NIISK), Kyiv Institute EnergoProekt (KIEP), and Interdisciplinary Scientific and Technical Center Shelter (now an Institute for NPP Safety Problems).

The arch elements of the NSC were supplied by Cimolai (Italy), whereas Par Systems was contracted to supply the main crane systems.

ArcelorMittal supplied 164,000m² of steel for the supporting decks and 12,000t of 40mm rebar for the foundation of the NSC. The profile cutting and oxy cutting of the steel frames are being performed by ShapeCut.

Blastrac Ukraine supplied a Blastrac BMG-435W triple-head grinding machine and a Blastrac BDC-1330 dust collector for the project. A DRILLFLEX type DF1100 built by HACO Kingsland is being used for drilling holes on the structural steel pillars.

The entire SIP for Chernobyl is being financed through the Chernobyl Shelter Fund, which is managed by the European Bank for Reconstruction and Development (EBRD). The funds are being provided by 45 countries and organisations, along with additional contribution from EBRD.

James Walker has the skills and in-house expertise to problem-solve,...

Konecranes is a world-leading group of lifting businesses, serving a...

Nysäter project is a 475MW wind park being developed in Sweden. It will be the second-largest onshore wind farm in…

The Mundra power plant is a 4,620MW coal-based thermal power station in the Kutch district of Gujarat in India. It…

XXL (Weesow-Willmersdorf) solar park is a 187MW solar project being developed in Brandenburg, Germany. It will be the largest solar…