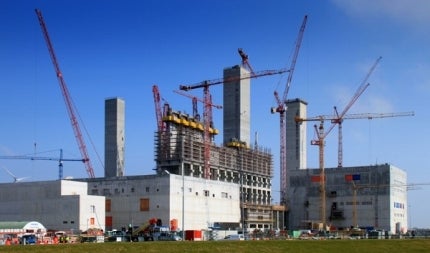 The 1,600MW Eemshaven Power Station is being constructed near Eemshaven Port in Groningen, Netherlands. The coal-fired power station will have an option to be partially fired by biomass, generating an electrical efficiency of 46.2%.

Essent and its parent company RWE are building the modern power plant, which is scheduled to be completed and commissioned for operations later in 2014.

Power generated from the plant will be sufficient to meet the electricity requirements of over 2.5 million homes in the region. It will use 20% less hard coal compared with conventional coal-fired power plants, thereby reducing CO2 emissions by 2.5 million tonnes annually. Up to 3,000 people are expected to be involved during the construction phase, while the project is expected to create more than 130 direct jobs.

The Eemshaven coal and biomass-fuelled power plant is spread across 50ha of land. Its close proximity to the Eemshaven port will ensure continuous supply of cooling water and fuel delivered by ships via the River Ems.

The location will also enable convenient transportation of other materials such as ground limestone, while power station ash will be transported in and out of the plant.

The project involves the construction of two coal-fired units, block A and block B, with a capacity to generate 800MW each.

Two ultra super critical boilers will be installed for firing fuel. These exclusive boilers have a unique feature to start up and shut down quickly and are highly beneficial when used in conjunction with wind energy.

Each 60t unit will comprise a main boiler feed pump, a geared booster pump, a minimum flow system and sound insulating hoods. The pumps will be driven by steam turbines to control speeds of 2,400rpm-4,680rpm, which could increase to 5,400rpm when used for a short duration.

The boiler feed pumps of each unit will have a maximum drive rating of 38,265kW and offer a flow rate of 2,500m³ per hour. The temperature of the fluid pumped will be around 190°C.

The flue gases from the power station will be filtered and purified in a flue gas purification unit, which is to be supplied by Hitachi Power Systems Europe. Flue gases will be washed using a mixture of lime and water in the desulphurisation units.

Pure gypsum is produced when sulphur dioxide reacts with limestone. The gypsum will be stored in the storage facility and later be used to make plaster board and other products. Dust from the flue gases will be removed using static electricity and will be supplied to the concrete and cement industry.

A 107m-high building will be built to house the combustion boiler measuring approximately 18m long, 18m wide and about 100m in height. The chimney stack will be 120m high.

Other infrastructure at the power plant will include a storage facility to store the fly ash and gypsum, 111m-high access towers and an 18m-deep port to cater to ships of up to 80,000t. The two electric filters for flue gas desulphurisation will be approximately 64m long and 35m high respectively.

Berkefeld, a subsidiary of Veolia Water Solutions & Technologies, was awarded a contract to build a water treatment plant (WTP) with a processing capacity of approximately 1,250m³ of sea water per hour. The WTP will use Veolia’s Multiflo process solution with coagulation, flocculation and lamella separation tank, including the dissolved air flotation (DAF) process for pre-treatment.

Seawater and brackish water will be treated using Berkal disc filter prior to the implementation of the membrane reverse osmosis process. Pure water will finally be produced using mixed-bed exchangers.

Alstom was awarded a €500m ($685m) contract to supply the two 800MW boilers for the Dutch coal-based power plant. German company KSB Aktiengesellschaft will supply the boiler feed pumps for the two units.

The Consult IKS Energy planning department of HOCHTIEF was contracted to provide structural design for the two coal-fired power stations. The company is implementing Sword CTSpace solutions to carry out the structural design.

Imtech Deutschland, in co-operation with Imtech Nederland, is providing the concept, project management and complete planning for the technological solutions for the power plant under a contract worth more than €31m ($42m).

The high-pressure piping system and the medium and low-pressure piping for the two power plant units are being designed, manufactured, assembled and commissioned by Bilfinger Berger Power Services. Ancillary works including pipefitting and welding, installation of the membrane walls and connecting lines will be performed by Keibel.

Sandvik Mining and Construction, under a contract worth SEK650m ($99.88m), will supply the materials-handling system, which includes two grab-type ship unloaders, two stackers and three portal reclaimers. It will also deliver a high-performance conveyor system featuring 38 conveyors, which are suitable for transporting both coal and biomass. The conveyors will incorporate an advanced chute design to enable dust-free transportation.