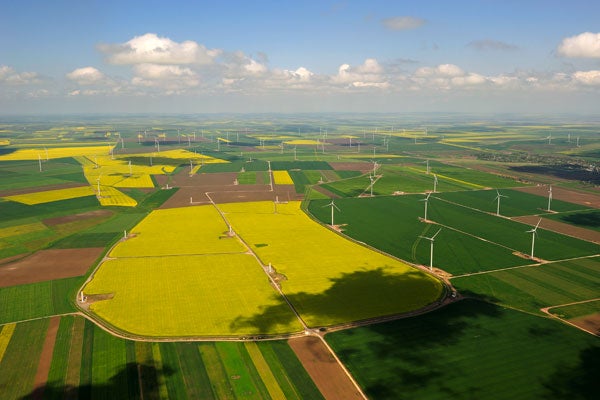 Fantanele-Cogealac Wind Farm is the largest wind project in Europe and the seventh biggest wind farm in the world. The 600MW wind farm is located in Constanta County of Romania. It contributes approximately ten percent of the Romanian renewable energy production.

It was the largest foreign direct investment in the Romanian renewable energy sector at that time.

The construction was, however, managed by CWP. The total investment on the project was $1.49bn.

“It was the largest foreign direct investment in the Romanian renewable energy sector at that time.”

The 600MW wind farm is located in a 2,700 acre field in the Fantanele and Cogealac municipalities of Constanta County.

It was developed in two phases, comprising of 240 GE 2.5MW wind turbines in total.

The first phase included the installation of 139 turbines generating 347.5MW in the Fantanele municipality. The second phase, developed in Cogealac municipality, includes 101 wind turbines with a total generation capacity of 252.5MW.

Fantanele-Cogealac wind farm is equipped with GE’s latest 2.5XL turbine technology. Each turbine has a hub height of 100m and rotor diameter of 99m. The turbines were installed in an area of 12km x 6km.

“The 600MW wind farm is located in a 2,700 acre field in the Fantanele and Cogealac municipalities of Constanta County.”

The turbines are equipped with the advanced WindSCADA technology for better supervision and control.

The nacelle of the turbines was manufactured in Germany, blades in Brazil, Spain and Germany, and the electric and electric components were shipped from US.

The components were shipped through the Port of Constanta on the Black Sea and taken to the construction site by road.

Construction of the Fantanele-Cogealac project

Power transmission and generation from the Romanian wind farm

European Investment Bank provided €200m loan for the construction and development of the wind project.

The CEZ Group also obtained €262m from the German Export Credit Agency Hermes. BNP Paribas acted as the structuring and coordinating bank, while Bayerische Landesbank acted as the loan agent.

Contractors involved with the Fantanele-Cogealac project

Siemens was awarded the contract to construct four power transformer substations at the wind farm site.

Viarom was awarded the civil works contract for the wind farm.

The contract included construction of access roads and concrete foundations for the turbines.

The electric cabling and electric substations supply and installation contract was awarded to Energobit.

The project management contract was awarded to Eneria.

The 470MW Flat Ridge 2 Wind Farm is situated about 43 miles southwest of Wichita in south-central Kansas, US.