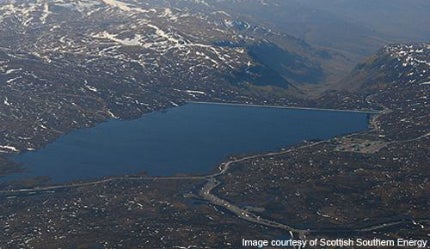 The Glendoe Hydroelectric Power Plant is located at the western end of the Monadhliath mountains in the east of Fort Augustus in Scotland.

It has an installed capacity of 100MW and is the first large, conventional hydro power station built in Scotland since 1957. The plant is owned by a Perth-based power company, Scottish and Southern Energy (SSE).

The estimated cost of the project was $259.6m (£160m). Construction works began in 2006 and were completed in 2008 two months ahead of schedule. The power plant was successfully tested at full capacity for 24 hours in December 2008.

It was officially opened in June 2009 by Queen Elizabeth II and The Duke of Edinburgh.

The power station can generate 180GWh of electricity annually, which is sufficient to power 53,000 households. The main operational characteristic of the plant is to produce electricity at full capacity in 90 seconds. It is also flexible enough to meet fluctuating power demands.

“The Glendoe hydro power plant has an immediate catchment area of 15km².”

In August 2009, a rockfall resulted in the blockage of the tunnel carrying water from the reservoir to the power station. This resulted in the closure of the plant. The turbine, however, remained unaffected.

The power plant was restarted in August 2012 and exported about 3GWh of electricity to the transmission network.

The costs of lost power production and repair work have been estimated at $24.3m (£15m) and $32.4m (£20m) respectively. SSE plans to seek damages from German construction firm Hochtief, which constructed the tunnel.

The Glendoe hydropower plant has an immediate catchment area of 15km² with the reservoir spread over an area of 60km². It is constructed at a height of 600m at Loch Ness near Fort Augustus.

Water is carried into the reservoir through an 8.6km long tunnel. The drop from the reservoir to the turbine is 600m high and allows power production from the stored water in the reservoir. It is the largest fall in the UK and was completed in 2008 after 16 months of continuous boring.

The reservoir dam is 1,000m long and 35m tall. It is situated at the head of Glen Tarff and is designed to suit the topography and geology of the area. It is also the longest dam built by SSE.

Water from the reservoir is carried to the turbines via another 8km long tunnel which ends at Loch Ness. An access tunnel of 1.3km in length reaches the underground power station.

The power station is situated 2km away from the Loch Ness. It includes turbine and generator units in a large cavern below the hill side. The smaller cavern which is adjacent to the large cavern houses the main transformer.

Engineereing and design of the projct was carried out by the Energy & Hydropower Division of Pöyry in Switzerland.

“The planning and turnkey project was awarded to Hochtief in 2006 for £126m.”

The planning and turnkey project was awarded to Hochtief in 2006 for £126m. The contract included construction of 16km long tunnel, a 900m long dam, a power house and other extensive subterranean constructions.

Tunnel repair work was awarded in the first quarter of 2010 to a joint venture of UK-based engineering and consultancy firms BAM Nuttal, AMEC and Halcrow. The contract was valued at $32.4m (£20m).

Construction of the Glendoe hydroelectric plant

The rockfall inside the tunnel created water blockage at 2,000m from the upper reservoir intake of the 6.2km long headrace. The debris was spread over 700m-800m on the downstream side of the 5m diameter unlined tunnel boring machine drive.

Tunnels were constructed using the drill and blast method.

Waldeck pumped-storage hydroelectric power station is situated on Lake Eder in the state of Hesse in central Germany. It is owned and operated by E.ON Wasserkraft.

With a host of new technologies riding the wave of innovation and investment, marine and hydropower are catching up with the major renewables.