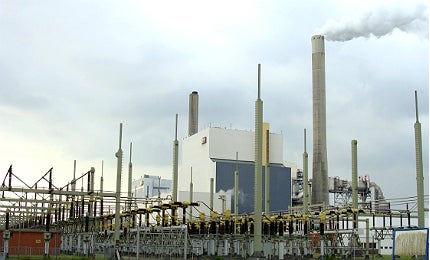 Hemweg 9 is a new combined cycle gas fired power plant at the Hemweg power station located in the western port area of Amsterdam, Netherlands. The power station is owned and operated by Nuon, a subsidiary of Vattenfall.

Hemweg 9 was built as a replacement of the old Hemweg 7 gas based power plant. The new unit is a modern combined cycle gas fired power plant with greater efficiency and better environmental performance.

The new Hemweg power plant can generate enough power to meet electricity needs of around 750,000 homes. The plant will also supply heat besides electricity, in future.

Nuon took an investment decision in early 2010 to replace the Hemweg 7 with a new plant based on modern combined cycle gas turbine (CCGT) technology for more efficient and environmentally-friendly power generation at Hemweg. The 511MW Hemweg 7 conventional gas-fired power plant was in operation since 1979.

Hemweg 9 delivered its first electricity to the Dutch power grid in May 2012. Hemweg 7 was closed at the beginning of January 2013, after 34 years of operation. The gas turbine that was added to Hemweg 7 in 1988, however, remains in use for peak electricity demand.

The new plant consists of a gas turbine, steam turbine and a generator arranged on a single shaft. It also has a heat recovery steam generator (HRSG) provided by NEM. The power generated by the new plant is transmitted via the existing 150 kV switching station at Hemweg.

“The plant uses the Siemens F-Class heavy duty gas turbine (SGT5-4000F), which has a gross power output of 292MW.”

Siemens also supplied the gas turbine, steam turbine, generator, the entire electrical equipment and the instrumentation and controls (I&C) system for the plant. Furthermore, Siemens is responsible for the long term maintenance of the plant.

Technology used at the Hemweg 9 facility

The SGT5-4000F gas turbine technology is known for its high performance, low cost power generation and significantly low emissions of NOx and CO2. Other aspects of the Combined Cycle power plant include a two-flow low-pressure steam turbine (SST5-5000) and a hydrogen-cooled generator, both provided by Siemens.

The plant is installed with a Siemens Power and Process Automation T3000 (SPPA-T3000) instrumentation and controls (I&C) system.

Performance of the unit at Hemweg power station

Hemweg 9 produces electricity from natural gas at an efficiency of 59%, which is 50% better than Hemweg 7. The new plant emits significantly less nitrogen oxides (NOx). Its CO2 emissions are also 30% lower than that of the Hemweg 7. Hemweg 9 is designed for cogeneration operation, although it is currently generating only electricity. Its energy efficiency will be increased further when it starts supplying heat.