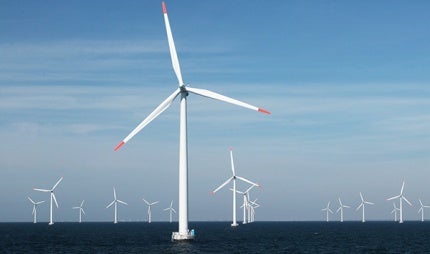 The Humber Gateway offshore wind farm is located approximately 8km off the Holderness coast, north of the mouth of the River Humber in East Yorkshire. It was under construction since 2012. The 219MW wind farm was developed by E.ON UK through its wholly-owned subsidiary Humber Wind at an estimated cost of £700m ($1.17bn).

The wind farm features 73 turbines and was officially opened in September 2015. The Crown Estate has leased the site for the offshore wind project for 40 years. The project provides power for up to 170,000 UK households.

The offshore wind farm covers 24.8km² (2,480ha) in 15m-deep waters within the Greater Wash strategic environmental assessment area, which was recognised as a suitable area for offshore power generation by the UK Government in 2002 for its good wind conditions and proximity to the National Grid.

E.ON submitted a bid to the Crown Estate for developing the wind farm in 2003. Planning applications for the wind farm, an onshore substation and onshore underground cable were submitted between 2008 and 2009. The project received approval from the government in February 2011.

The Humber Gateway wind farm uses 73 Vestas V112 3.0MW turbines, which have a 112m rotor diameter and a 9,852m² swept area. The pitch-regulated variable speed turbines are designed to operate at a rated wind speed of 12m/s with cut-in and cut-out wind speeds of 3m/s and 25m/s respectively.

The turbine blades are 54.6m-long and have a maximum chord length of 4m. The tubular steel towers for the turbines have a maximum diameter of 4.2m and a maximum section length of 32.5m. The turbine hub, weighing 70t, is 3.9m-high and 3.2m in diameter. The turbine’s 3.9m-wide and 14m-long nacelle accommodate a planetary / helical gearbox with two planetary stages and a single helical gear stage, and a permanent magnet generator producing electricity at a frequency of 50Hz / 60Hz.

"The wind farm features 73 turbines and was officially opened in September 2015."

The V112 3.0MW turbines are equipped with energy-saving CoolerTop™ technology, which allows the coolant used in the turbine’s cooling system to be cooled by channelling wind into the radiator, reducing the sound levels of the turbine. The standard operational temperature range for the turbine is between -20°C and 40°C.

Three meteorological masts are installed at the wind farm site to measure the wind speed and keep check on the weather conditions.

Power generated from the offshore wind farm is fed into the National Grid through an offshore cable laid from the wind farm to Easington where it adjoins a 30km-long underground onshore cable running up to Salt End.

Two new substations, one offshore and one onshore, were built to step up the voltage of electricity generated by the wind farm.

Works for onshore cable installation, the substation connection to the National Grid, as well as the construction of an operations and maintenance base at Grimsby dock started in 2012.

"Three meteorological masts are installed at the wind farm site to measure the wind speed and keep a check on the weather conditions."

Offshore construction works, including the installation of subsea export cable and turbine foundations, started in 2013. Horizontal directional drilling techniques were used for connecting the subsea cables with the underground onshore cable.

The operations and maintenance base for the wind farm was inaugurated in August 2014, by which time 61 out of 73 turbine foundations, as well as the first two turbines, were installed at the offshore site.

ABB was awarded a $15m contract in March 2012 for the design and supply of 28km of 132kV three-core AC submarine cables for the wind power project.

TAG Energy Solutions provided monopole foundations for the turbine towers of the project. DEME (Dredging, Environmental and Marine Engineering), on behalf of E.ON UK, performed the definitive geotechnical site investigation for the project.

Harland and Wolff Heavy Industries were awarded the design and fabrication contract for the offshore substation jacket.

Detecting blade defects and monitoring the ageing of wind turbines...

Why digitalisation is the next big thing in clean energy transition

Auto-bidding and the future of energy storage

Maverick Creek is a 492MW wind farm located in Concho County, Texas, US. Inaugurated in April 2021, it is owned…