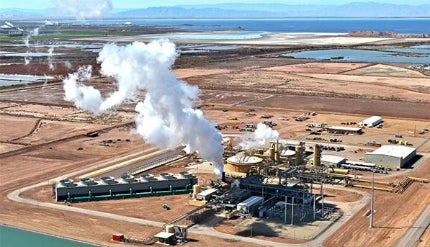 The plant is named after John L Featherstone, a technology pioneer in the Salton Sea field and one of the founders of EnergySource.

The John L Featherstone plant is a three-stage flash geothermal plant with an installed capacity of 49.9MW. It is the first new stand-alone geothermal plant in over 20 years in the Salton Sea area. Construction began in May 2010.

The $400m geothermal power plant provides electricity for approximately 50,000 houses. It created more than 200 jobs during construction. It has also created 55 full-time jobs during the operational phase.

It won the Geothermal Project of the Year 2012 title from the editors of Power Engineering magazine, Renewable Energy World and PennWell Corp. The plant also won an environmental stewardship award from Environmental and Energy Study Institute (EESI) and Geothermal Energy Association (GEA).

The Salton Sea field, where the plant is located, has the largest and highest temperature geothermal resources in North America. Salton landscape zones are rich in magma (mixture of molten and semi-molten rock). Subsurface magma formations are the main source for a geothermal plant. The development potential of Salton Sea region is expected to be 1,400MW.

Salton landscape contains large reserves of superheated liquid. Production wells at the plant collect liquid from the reserves and send it to the surface. The geothermal reservoirs collect the superheated liquid, which is is triple-flashed under pressure and then separated in a steam separator, separating the steam and brine.

The steam will be used to drive the turbines, which will run the generators to produce electricity. The brine is sent to the chemical plant.

The brine from the minerals of the Salton landscape will clog the geothermal system, so a chemical plant has been set up along with the thermal plant. The chemical plant treats the brine to extract the minerals, and sends the heat back to the reservoir wells. The minerals extracted from this process will be used to manufacture batteries.

The plant uses a Crystalliser reactor clarifier process, which is an advanced method for turning the geothermal superheated liquid into steam while removing solids. The process helps achieve thermal gains and recover minerals effectively. The brine handling system in the plant prevents mineral build-up, so minimises corrosion.

In addition, the plant is equipped with a new type of process vessel, which accepts the solid-laden brine waste streams, and an integrated process that directs the brine flow streams in order to minimise air contact.

Salt River Project from Arizona purchases the power from the Hudson Ranch plant. The sale is made under a 30-year Power Purchase Agreement.

Performance Mechanical Company was the general contractor for the project. It provided construction management and start-up services. The plant’s construction included complete site development, construction of new county road, and earth work for the 60-acre site.